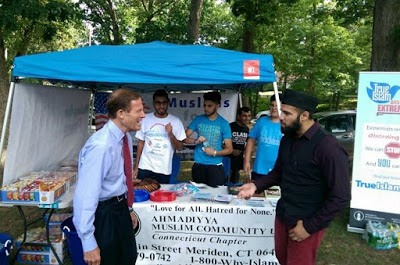 USA: Ahmadiyya Muslims in Meriden among National Night Out events held across Connecticut

USA: Ahmadiyya Muslims in Meriden among National Night Out events held across Connecticut

HARTFORD, CT (WFSB) – An event meant to bridge a gap between police and the communities they serve is being held Tuesday night.

Meriden was also one of the communities holding a National Night Out, at Hubbard Park.

It was the 12th year for the free event, where 60 civic organizations and nonprofits showed up to share their services as well.

Two groups also taking part in the event were the Ahmadiyya Muslim Community and the Meriden Police Department, with both hoping to use events like this one to build stronger relationships within the community.

“We are all about community service and helping our neighbors and getting to know everybody, especially after the incident that happened at our mosque…it’s very imperative to do this as Muslims we want to come and show our solidarity with everybody,” said Zahir Muhammed Mannan, of Ahmadiyya Muslim community.

“We want to build those relationships, to make sure that they can come to us and speak to us freely without having any repercussions whatsoever, we want an open relationship with the community and these are the types of event that help us build those bonds,” said Meriden Police Sgt. John Mennone.