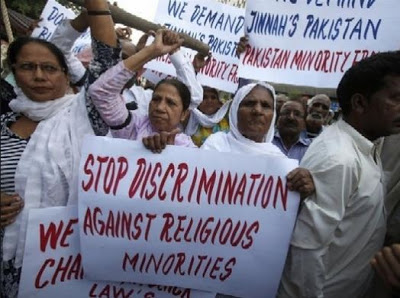 Seventy-four percent of the worldâ€™s population lives in â€œcountries with serious restrictions on religious freedom, whether caused by government policies or the hostile acts of individuals, organizations, or societal groups.â€

That is the conclusion of the State Department in its latest International Religious Freedom (IRF) Report. According to the Ambassador-at-Large for International Religious Freedom, David Saperstein, the world is currently â€œwitness[ing] violent upheavals, some of historic proportions, in which entire communities are in danger of being driven out of their homelands based solely on their religious or ethnic identities.â€

While these serious restrictions and this violent upheaval are occurring in only 24%of the worldâ€™s countries, those nations cover 74% of the worldâ€™s population. Â It is difficult to fully comprehend the devastation, pain, trauma, and fear that Christians and other religious minorities face on a daily basis. But these restrictions and violent acts are very real, and threaten to annihilate Christianity in the countries in which they occur.

The State Departmentâ€™s newest International Religious Freedom Report, upon which Ambassador Sapersteinâ€™s statements were based, addresses religious freedom violations in countries such as Pakistan and Sudan, as well as the violent and deadly acts of the Islamic State (ISIS), Boko Haram, and other radical Islamic organizations that target Christians and other religious minorities.

The Executive Summary of the report highlights Pakistanâ€™s blasphemy laws and Sudanâ€™s apostasy law. Also highlighted are the â€œbarbarousâ€ acts of ISIS, which is responsible for â€œkillings, torture, enslavement and trafficking, rape and other sexual abuse against religious and ethnic minorities and Sunnis in areas under its control.â€

Here at the ACLJ, we are engaged in many of the religious freedom issues addressed in the report, and are working to protect the victims of these abuses. Our work extends to places like Pakistan and Sudan in a global effort to defend persecuted Christians.

Recently, our international affiliate the European Center for Law and Justiceâ€™s (ECLJ) office in Pakistan, the Organization for Legal Aid (OLA), assisted in the case of a Christian woman, Sonia Gill, who was falsely accused of blasphemy. When the matter was further investigated, it was determined that no blasphemy had occurred. Currently, Asia Bibi, a Pakistani Christian mother of five, is imprisoned and on death row also because she was falsely accused of blasphemy. She has now spent nearly 6 years in prison for a crime she didnâ€™t commit. The ACLJ continues to advocate for her release. Moreover, the ACLJ has repeatedly spoken against Pakistanâ€™s blasphemy laws, as case after case reveals that these laws are used to target and persecute Christians, not to protect the Islamic religion. As stated in the IRF Report on Pakistan, â€œreligious minorities continue[] to be disproportionately accused of blasphemy relative to their small percentage of the population.â€

The IRF report for Sudan highlighted the cases of Mariam Ibraheem and Christian Pastors Michael and Peter. Youâ€™re familiar with these cases because we reported on them extensively. Miriam Ibraheem is the Christian mother of two, who gave birth to her second child while in prison and facing a death sentence for apostasy. Pastors Michael and Peter also faced possible death sentences while imprisoned in Sudan because of their faith. Thankfully, through the prayers of many, the voices of hundreds of thousands, and our relentless legal advocacy across the globe these Christians were freed. It is important to continue using international law mechanisms to hold countries like Sudan responsible for violating the religious freedoms of their citizens.

In Afghanistan, Christians face hostility, discrimination, and persecution. According to the IRF report, there are â€œno public Christian churches,â€ and Christians continuously try to â€œavoid situations where the government might perceive them as seeking to spread their religion to the larger community out of fear of government reprisal.â€ Similarly, in Iran, â€œ[t]he government continued to . . . regulate Christian religious practices closely to enforce the prohibition on proselytizing.â€ â€œMuslim converts to Christianity reportedly continued to face harassment, arrest, and detention.â€ Â In fact, as of the report, at least 26 Christian converts were imprisoned in Iran. In all likelihood, the real number is much, much higher.

In Iraq, not only are Christians faced with genocidal persecution from ISIS, but they also face governmental restrictions on their religious freedom. For instance, according to the report, â€œevangelical Christians also reported they were unable to meet the minimum requirements for registration, resulting in their nonrecognition by the Council of Iraqi Christian Church Leaders. . . . [T]he inability to register also constrained the ability of evangelical Christians to proselytize and subjected them to unfair scrutiny by the government.â€

Christians in India not only faced destruction of their churches and property, but â€œ[p]olice disrupted church services and arrested Christians on charges of forced conversions and disturbing the peace.â€ According to the report on India, in 2015 â€œthere were 177 incidents of violence, harassment, or discrimination across the country targeting Christians. Incidents included assaults on missionaries, forced conversions, and attacks on churches, schools, and private property.â€

The report addresses the barbaric jihadist activities of Boko Haram â€“ a radical Islamic army â€œwhich pledged allegiance to [ISIS] in an audiotaped message in March 2015.â€ Boko Haram has â€œcontinued to launch indiscriminate, violent attacks targeting both Christians Â . . . [and] claimed responsibility for scores of attacks on churches and mosques, often killing worshippers during religious services or immediately afterward.â€

ISIS itself has continued to terrorize Christians and other religious minorities by perpetrating genocide on those who live within its control. The ACLJ is vigorously involved in advocating for an end to this genocide. Not long ago, we provided a timeline of events that details some of the atrocities that members of ISIS have committed. These acts are horrific and sickening. Rape, torture, murder â€“ all of these are common place in ISIS-controlled areas. In addition to informing you on ISIS atrocities, we are vigorously working to bring an end to this genocide. It is crucial that we continue to advocate for the United States and international governments to take action that will end this genocide and protect the victims.