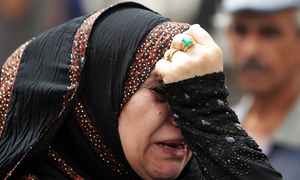 BAGHDAD: At least 15 people were killed at a wedding party near Iraq’s southern city of Karbala late on Sunday, police said on Monday.

A police statement said five assailants including a suicide bomber attacked the celebration in Ain al-Tamr, west of Karbala.

The group opened fire with machine guns and threw hand grenades at the party, the statement said, and security forces killed all the attackers.

Initial reports in local media late on Sunday, citing security sources, blamed the killings on a dispute between two tribes at the wedding party in Ain al-Tamr.

The previous bombings targeting Shia cities were claimed by the militant Islamic State group, the ultra-hardline Sunni group that controls parts of northern and western Iraq.

There were no claims of responsibility for Sunday’s attack, 12 hours after it happened.