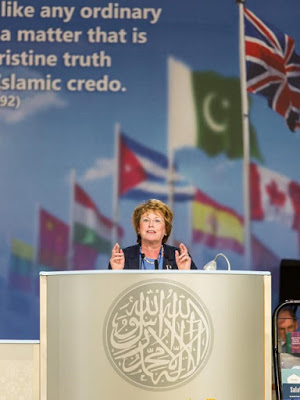 The Worldwide Head â€“ or Caliph â€“ of the Ahmadiyya Muslim Community, His Holiness Hazrat Mirza Masroor Ahmad, led the three-day convention in the Hampshire countryside.

She said: â€œAhmadi Muslims in Watford are passionate about their town and regularly make a valuable contribution to the community.

â€œWhether it is helping to raise funds for the Royal British Legion or hand-delivering thousands of leaflets highlighting Islamâ€™s commitment to loyalty, freedom, equality, respect and peace.

â€œAhmadi Muslims are ambassadors for their faith and set a fine example for others to follow.â€

The convention culminated in all delegates taking a pledge – as they have done every year- reaffirming their loyalty to their country of residence.

President of the Watford Ahmadiyya Muslim Association, Lutful Islam said: â€œWe care deeply about our town and were delighted that our Elected Mayor was able to join our special 50th-anniversary convention and speak so eloquently about the need for the true Islamic teaching of love, peace, and tolerance to triumph over adversity.

â€œWatfordâ€™s Ahmadi Muslims take great pride in their town. When we say Islam means peace â€“ we practice it by example in our everyday lives through regular interfaith and outreach activities such as peace conferences, leaflet campaigns, tree-planting and litter picking.â€

Ahmadi Muslims â€“ one of the oldest Muslim groups in Britain â€“ are active in their communities and raise thousands of pounds for charities each year and have their own charity Humanity First.

Abdul Samad, a member of the Watford Ahmadiyya community said: â€œIt was the first time we hosted Dorothy at the convention and she was pleasantly surprised to see the extent of the event and how well organised it was.

â€œWatfordâ€™s Ahmadi Muslims volunteer at the event so it means a lot that our Mayor visited us this year.â€

In 2003 the Ahmadi Muslims opened the largest purpose built mosque in Western Europe in Morden Surrey, which can accommodate more than 13,000 people.

The community also built the first mosque in London in 1924.