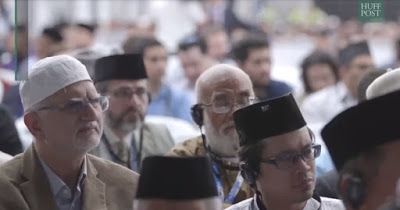 A festival held in the middle of a field in rural Hampshire brought 30,000 Muslims together to try and tackle extremism.

The â€˜Jalsa Salanaâ€™, which was held over the weekend in Alton, saw thousands of Ahmadiyya Muslims attend to discuss tackling misinterpretations of Islam. Now in its 50th year, the festival is open to everyone, in the hope of dispelling beliefs that Islam is a violent religion.

The event kicks off by hoisting the Union Jack as a mark of loyalty to Great Britain. Lasting for three days, the Caliph – the leader of the Ahmadiyya Muslim Community – delivered speeches to promote the peaceful teachings of the religion.

The Ahmadi community has been running a nationwide campaign called â€œunite against extremismâ€ in order to try and tackle terrorism.

Ahmadi Muslims are heavily persecuted by other Muslims as they believe their religionâ€™s founder, Mirza Ghulam Ahmad, is the Messiah as prophesied by the Islamic prophet Muhammad.