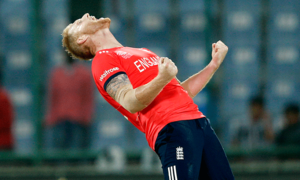 Stokes eager to bowl against Pakistan

Stokes eager to bowl against Pakistan

LONDON: Ben Stokes is looking forward to giving England an extra bowling option as they go in search of a one-day international series-clinching win against Pakistan at Trent Bridge on Tuesday.

England will head to Nottingham 2-0 up with three to play after convincing wins at Southampton and Lord’s.

All-rounder Stokes has been involved in both those victories but as a batsman only after a calf problem prevented England one-day captain Eoin Morgan deploying him as a member of the hosts’ pace attack.

But the Durham star hopes to be firing on all cylinders come Tuesday’s day/night clash in the English Midlands.

â€œThe plan from the start was to be fit and ready to bowl by the third ODI and by the way things are going it is looking likely I will be an option for Eoin in Nottingham if needed,â€ he said after Saturday’s four-wicket win at Lord’s.

â€œI have done all the prep to get myself fit and put my hand up to say I am ready to bowl.

â€œI’ve bowled for about 15 minutes flat out and all the build-up stuff I needed to do has been done, so if I am needed hopefully Eoin will ask.â€

An outstanding fielder, the 25-year-old Stokes said not been able to bowl had proved a frustrating experience.

â€œIt’s so boring. Honestly, it makes the fielding innings seem a lot longer because if you bowl 10 overs it kind of takes 20 overs out of the game for you,â€ he said.

â€œBut I pride myself on my fielding as well and one thing that keeps me switched on the whole time is that I don’t want to give away any runs.

â€œI want to try and stop as many as possible â€“ and applying myself to that has got me through the fact I am not bowling.

â€œBut it’s nice to get that confidence from your captain and coach saying ‘we want you to play as a specialist batsman’ â€“ so I have wanted to make sure I make some runs in these first two matches.

â€œI think that knowing I wasn’t going to bowl in these first two games I have worked longer on my batting in the buildup days in training.

â€œIt’s been quite nice to solely concentrate on the batting side in these first two.â€

England, whose 50-over cricket has improved markedly since their dismal first-round exit from last year’s World Cup, have so far dominated a Pakistan side who are a lowly ninth in the one-day international rankings.

But Stokes played down talk of a 5-0 whitewash by saying: â€œWe could spill into dangerous territory if we start to think too far ahead.

â€œWe have gone 2-0 up in the series because we have been playing the better cricket. If we were to think we have won it already and slip up on what we have been doing that could be the worst thing we could do.

â€œWe haven’t won the series yet so. We’ve got the next one to do that, so we’ll still be trying to improve on these performances.â€