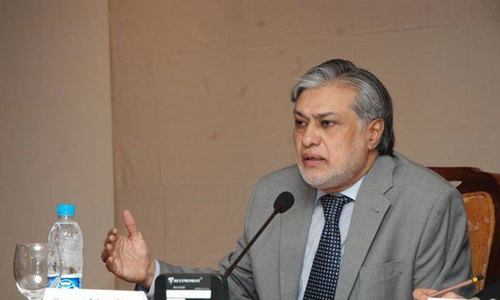 ISLAMABAD: The South Asian Association for Regional Cooperation (Saarc) finance ministers and heads of delegations decided on Wednesday to accelerate the process towards South Asian Economic Union in a phased and planned manner.

Finance Minister Ishaq Dar, who chaired the Saarc finance ministersâ€™ meeting, later explained to the media salient features of the decisions taken at the meeting.

He said the finance ministers agreed to ensure implementation of decisions recommended by the member states at various Saarc mechanisms in order to realise the goals of Saarc charter to promote the welfare of the people of South Asia and to accelerate economic growth, social progress and cultural development in the region.

The Saarc finance ministers decided to initiate discussion on widening the scope of Saarc agreement on avoidance of double taxation and mutual administrative assistance in tax matters.

They emphasised the need for harmonisation of customs procedures and documentations in the region to facilitate movement of goods across the borders. They also underlined the need for improved connectivity in the region including through land, sea and air route and early signing of motor vehicle and railways agreements.

It was decided to strengthen social window and operationalise economic and infrastructure windows of Saarc Development Fund so that tangible benefits are visible on the ground. Enhanced intra-regional investments were emphasised with a view to bridge the large infrastructure financing gap in the region.

The meeting recommended that Saarc secretariat should commission a study on export and import patterns of member states within and outside the region with a view to improve intra-regional trade. The Asian Development Bank and UN ESCAP or trade bodies in member countries should be approached for supporting the initiative.

Earlier, in his welcome address, Finance Minister Ishaq Dar said that since the last meeting of Saarc held in Kathmandu in 2015, significant headway had been made in regional collaboration in the areas related to economic and financial cooperation among the member states.

There is, however, a need to intensify the efforts on reduction or removal of non-tariff and para tariff barriers, trade facilitation measures, investment cooperation, reduction of products in sensitive lists, Saarc agreement on trade services, improvement in connectivity, energy cooperation, harmonisation and simplification of customs procedures and agreement on promotion and protection of investment to achieve our goal for the betterment of the peoples of the region.

Afghanistan has offered to host the next meeting of the Saarc finance ministers in Kabul in 2017.