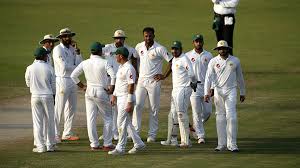 The first Test match between New Zealand and Pakistan is scheduled to go head this week after engineers checked the safety of the Christchurch cricket venue following a massive earthquake that rattled the centre of the country early on Monday.

It was felt strongly in Christchurch, South Island’s largest city, which was hit by a 6.3 quake in 2011 that killed 185 people.

New Zealand Cricket officials told reporters in Christchurch on Monday the match would go ahead.

Both teams arrived in the city on Monday, with the Pakistan side arriving from Nelson, where they felt the tremors.

“We were on the seventh floor of the hotel and it was pretty scary. The boys all raced down stairs and most of the guys slept in the team room last night. They were a bit scared to go back up to their rooms.â€

New Zealand bowler Matt Henry, who lives in Christchurch, added he had been woken by the initial quake, which struck shortly after midnight on Monday.

â€œI was just laying in bed and woke up to quite a long rumble, so a bit scary,â€ Henry told reporters.

â€œThey are obviously a bit hard to get used to. You kind of sit there waiting to see if you need to react or if you can sit tight. It was quite a long rumble this one.â€

With parts of north Canterbury and around the tourist town of Kaikoura devastated, Henry said he hoped the test would help bring people together.

â€œFor a brief moment, you can get back to a bit of normality.”

â€œIt’s probably good timing to have the test match this week and it will be a really good occasion.â€

Henry said his team mates would be conscious of safety concerns at their hotel in Christchurch. â€œI’m sure a lot of them will want to stay on the lower levels,â€ he added. 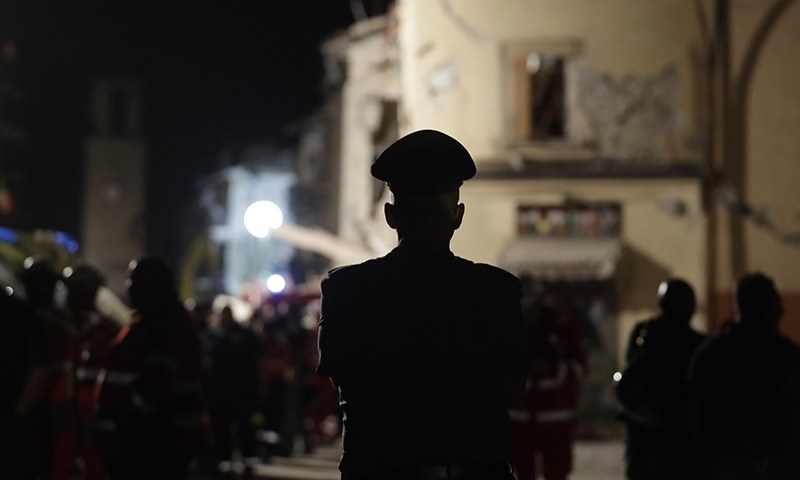 ACCUMOLI: The death toll from a powerful earthquake that shook central Italy rose to 247 on Thursday, officials said, as rescuers desperately searched for survivors in the rubble of devastated mountain villages.

Hundreds of others were injured, some critically, and an unknown number were trapped under the ruins of collapsed buildings after Wednesday’s pre-dawn quake.

Amid scenes of carnage, dozens of emergency services staff and volunteers were determined to attempt to pluck more survivors from the ruins.

Rescuers had pledged to work through the night in the hope of finding people alive in the mangled wreckage of homes.

Prime Minister Matteo Renzi had earlier warned that the toll would likely rise after visiting the badly hit village of Amatrice.

Hundreds of people spent a chilly night in hastily assembled tents with the risk of aftershocks making it too risky for them to return home.

Scores of buildings were reduced to dusty piles of masonry in communities close to the epicentre of the quake, which had a magnitude of between 6.0 and 6.2.

It hit a remote area straddling Umbria, Marche and Lazio at a time of year when second-home owners and other visitors swell the numbers staying there.

Many of the victims were from Rome.

The devastated area is just north of L’Aquila, the city where some 300 people died in another quake in 2009.

Most of the deaths occurred in and around the villages of Amatrice, Accumoli and Arquata del Tronto.

Guido Bordo, 69, lost his sister and her husband after they were trapped inside their holiday house in the hamlet of Illica, near Accumoli.

“There’s no sound from them, we only heard their cats,” he told AFP before the deaths were confirmed.

“I wasn’t here. As soon as the quake happened, I rushed here. They managed to pull my sister’s children out, they’re in hospital now,” he added, wringing his hands in anguish.

Among the victims was a nine-month-old baby girl whose parents survived, an 18-month-old toddler and two other young children who died with their parents in Accumoli.

Two boys aged four and seven were saved by their quick-thinking grandmother, who ushered them under a bed as soon as the shaking began, according to reports. She also survived but lost her husband.

Renzi said it was too early to consider what might have been done to prevent the disaster.

“Today is the time for tears and emotion,” he said, vowing that his government would start reconstruction work first thing on Thursday.

It was Italy’s most powerful earthquake since the 2009 disaster in L’Aquila.

“Half the village has disappeared,” said Amatrice mayor Sergio Pirozzi, surveying a town centre that looked as if had been subjected to a bombing raid.

The tremors were strong enough to be felt 150 kilometres away in Rome, where authorities ordered structural tests on the Colosseum.

Some of the worst damage was in Pescara del Tronto, a hamlet near Arquata in the Marche region where the bodies of the dead were laid out in a children’s park.

With residents advised not to go back into their homes, temporary campsites were being set up in Amatrice and Accumoli as authorities looked to find emergency accommodation for more than 2,000 people.

Amatrice is a hilltop beauty spot considered home of amatriciana, one of Italy’s favourite pasta sauces. It is popular with Romans seeking cool mountain air at the height of the summer.

Out of the blue’

The first quake measured 6.2, according to the United States Geological Survey (USGS).

It measured 6.0 according to Italian monitors, who put the depth at only four kilometres. A 5.4-magnitude aftershock followed an hour later.

Italy is vulnerable to earthquakes and the 2009 tremor in L’Aquila led to lengthy recriminations over lax building controls and the failure of authorities to warn residents that a quake could be imminent.

David Rothery, Professor of Planetary Geosciences at Britain’s Open University, said the shallowness of Wednesday’s quake had made it more destructive.

But he added: “Unlike the L’Aquila quake, which was preceded by swarms of smaller quakes and led to claims â”€ unjustified in my view â”€ that the eventual big quake should have been predicted, this one appears to have struck out of the blue.”