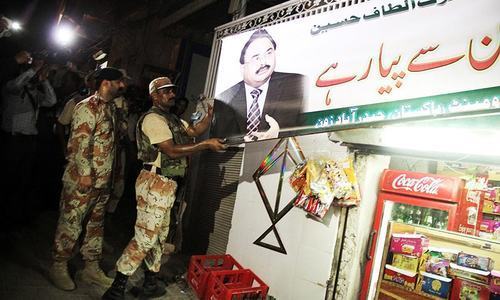 KARACHI: The apology from Altaf Hussain for his â€œanti-Pakistan remarks and slogansâ€ and subsequent damage-control moves by the local leadership of the Muttahida Qaumi Movement do not seem to be working for the party as the authorities continued to round up key MQM men and seal its offices with some of them even bulldozed on Thursday.

In a related development in London, the British parliamentarians approached their government for action against the party because it was using â€œBritish soil against Pakistanâ€.

Though there was no word from law enforcement agencies on the development, police sources confirmed the move and the MQM in a statement expressed concern over the action against the elected representatives.

â€œThe details of cases against the two (legislators) would be shared with you people very soon,â€ said a senior police officer in a brief response to Dawn while confirming the arrests.

The MQM statement condemned the arrests and called it violation of the law. â€œThe MQM is a patriotic and democratic party. But still its MNA Asif Hasnain and MPA Shiraz Waheed were arrested in false cases.

Itâ€™s against the spirit of the Constitution and law of the land. The people of Karachi are justified in feeling that they are pushed against the wall,â€ it regretted.

On the other hand, law enforcement agencies led by Rangers continued to seal MQMâ€™s unit and sector offices in different areas of Karachi as well as other parts of Sindh. The party offices in Federal B. Area, Liaquatabad, PECHS, Gulshan-i-Iqbal, Gulistan-i-Jauhar, NazimÂ­abad and North Nazimabad were sealed in the early hours of Thursday morning.

The local administration also sprang into action and demolished the partyâ€™s unit offices in Mosamiyat, Bhains Colony, Tariq Bin Zaiyad Society, Gulshan-i-Maymar and Shah Faisal Colony on the plea that they were raised on â€œencroached pieces of landâ€.

The action followed a directive by the Sindh chief minister for removing all encroachments in the city.

Taking a policy decision to resolve the issue of traffic congestion in the city, Chief Minister Syed Murad Ali Shah directed the Karachi administration to open closed parking areas of commercial buildings and shopping plazas within 10 days and also remove illegal parking and encroachments from important roads and areas, said a CM House statement issued after a meeting presided over by the chief minister earlier in the day.

According to an official, the decision to demolish the MQM offices built on state land and amenity plots was taken during a meeting between Interior Minister Chaudhry Nisar Ali Khan and Chief Minister Shah on Wednesday. Besides, he said, the provincial and federal governments had also decided to dismantle or seal those offices of the party which helped unscrupulous elements or created fear among the general public.

In another significant development, giant posters of Altaf Hussain placed for decades were removed from the prominent Mukka Chowk â€” a place close to the MQM headquarters Nine-Zero â€” on Thursday.

The party strongly reacted to the removal of its founding chiefâ€™s posters from different areas of the city and warned that the move could lead to an â€œirreparable lossâ€. It claimed that â€œtolerance and intelligenceâ€ demonstrated by the MQM-Pakistan after the recent political crisis had managed to control the situation to a large extent.

â€œBut these acts [removal of Altaf Hussainâ€™s posters and demolition of party offices] are sabotaging all these efforts. This could lead to an irreparable loss, which is a source of serious concern for the MQM coordination committee,â€ the party said in a statement.

The situation was no different in Hyderabad where posters, banners and panaflexes carrying Mr Hussainâ€™s picture were removed in different parts of the city by anti-encroachment staff under the supervision of law enforcement personnel.

Apart from growing challenges and criticism in Pakistan, the MQM is likely to face the same situation in the UK where the British legislators had already approached the government, questioning its lack of action against the party.

British-Pakistani parliamentarians such as Baroness Syeda Warsi and Lord Ahmed are taking a strong line on the issue on social media. Increasingly, MPs are writing to senior UK officials, asking why, despite years of investigations, no action has been taken against the party.

â€œWhy we have not proscribed MQM as a terrorist organisation?â€ wrote Naz Shah, Labour MP for Bradford. In a letter to Home Secretary Amber Rudd, she also asked: â€œWhy, despite the recent conviction of hate preacher Anjem Chaudhry, British police have not launched any investigation into the incitement of violence by Altaf Hussain on British soil against Pakistan?â€

In another letter, Birmingham MP Khalid Mahmood asked both Amber Rudd and Foreign Secretary Boris Johnson why the British government had not taken any action against Mr Hussain. â€œI strongly believe,â€ he wrote, â€œthat British citizens should not be using the United Kingdom as a political base to incite violence against countries that the United Kingdom is allied with, such as Pakistan.â€