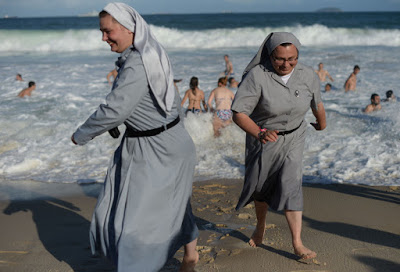 Whereâ€™s the Outrage Over Nun Beachwear?

While the French are banning Muslims in burqinis, Italian Catholic bishops find it ironic thereâ€™s alarm when a woman is â€œoverdressed while swimming in the sea!â€

SABAUDIA, Italy â€” Go to any public beach in Italy and chances are youâ€™ll eventually see a woman wearing a veil and long skirt. But she likely wonâ€™t be a Muslim in a version of the controversial burqini. She will almost certainly be a Catholic nun in her summer habit either watching children in her care or, God forbid, just enjoying some sun, which is considered a human right here in Italy, where the sea defines the majority of the borders.

No one in Italy would dare blink an eye at the sight of a habit-wearing sister at the seaside or even in the water.

â€œWe have nuns on the beach all the time,â€ Marco Beoni, a barista at a coffee bar along the sea near Sabaudia, about an hour south of Rome, told The Daily Beast. â€œThey go in the water in their skirts and sit on blankets just like everyone else. Who cares what they are wearing. Whatâ€™s the problem?â€

In fact, most Italians are at odds with edicts at several French beach resorts banning women wearing the burqini (also spelled burkini), as the modest full coverage swimwear is called. Even Socialist Prime Minister Manuel Valls has waded into the debate in Paris, declaring the wearing of the burqini is “not compatible with the values of France and the Republic.”

Italyâ€™s interior minister, Angelino Alfano, himself no great fan of immigration or integration of non-Italians into the country, said he thought France was making a mistake by banning the burqini. â€œWe aim to avoid certain prohibitions that can be interpreted as provocations that could trigger retaliation towards Italy,â€ he said when asked if Italy would follow France in banning what has been interpreted as religious wear on the beach. â€œAfter all, the â€˜French modelâ€™ of integration has not yielded great results.â€

It should be no surprise at all that the Catholic Church, for its part, doesnâ€™t see any problem whatsoever with modest swimwear. The head of the Italian bishops, Monsignor Nunzio Galantino, said that caution is understandable, but only when tempered with common sense.

â€œItâ€™s hard to imagine that a woman [in a burqini] who enters the water is there to carry out an attack,â€ he told the daily Corriere della Sera in a far-reaching interview on the topic. â€œI can only think of our nuns, and I think of our peasant grandmothers who still wear head coverings.â€

Making an analogy with the wearing of a cross or a kippah, Galantino said, â€œThe freedom to be granted to religious symbols should be considered on a par with the freedom to express oneâ€™s beliefs and to follow them in public life. And, let me tell you: I find it ironic that we are alarmed that a woman is overdressed while swimming in the sea!â€