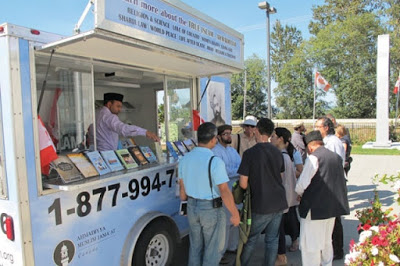 The Mobile Muslims travelling exhibit made a stop at the Baiter Rahman Mosque in Delta last Friday. Â  Photograph By Ian Jacques

A cross-Canada tour trying to dispel negativity surrounding Muslims and to present the true teachings of Islam made a stop in Delta last Friday.

The Ahmadiyya Muslim Jama’at Canada launched a nation-wide campaign called #MobileMuslims, in which an exhibit has been driven coast-to-coast to spread the true, peaceful teachings of Islam and remove misconceptions about the religion by stopping at various cities along the way.

The exhibit departed St. John’s, NL on July 13 and ended in Vancouver on Aug. 21.

“This tour has been amazing. I have developed a higher respect for Canada travelling across the country. It is so beautiful,” said spokesperson Omer Ahmed outside Baiter Rahman Mosque in Delta. “The people have been very welcoming and accommodating. I have found that regardless of which path we took, the warmth of people did not change.

“The main purpose of the tour is to clear misconceptions of our religion. Just because there are certain groups, like Isis for example, who use our name for their political gain, does not mean that all of us are like that. We want to show people what true Islam is all about. We are all about peace.

is to go out to the people and spread our message.”

Ahmed lives just outside of Hamilton. He was joined on the tour by a man from Calgary, a 17-year-old student from North York, a doctor from Sydney, NS and two others from Ontario.

“Right wing media what they portray Muslim to be is simply not true,” added public relations spokesperson Irfan Chaudhry. “We are here to stand up and be loud and proud as Canadians who love this country. Loyalty to one’s nation and faith is required and mandatory in our religion. This exhibition represents our feelings towards Canada and how Muslim is not being given the proper image and portrayed in the proper light.”

Chaudhry said to his knowledge this is the first cross-Canada tour and exhibit of its kind.

“We’re here to stand up for the majority and say we are not what you see. The horrible atrocities that are being committed worldwide do not represent and do not have the capability of calling themselves Muslims,” he said.

“The Canadian public is very tolerant and accepting. There is no other country like it and this tour has been very well received.”