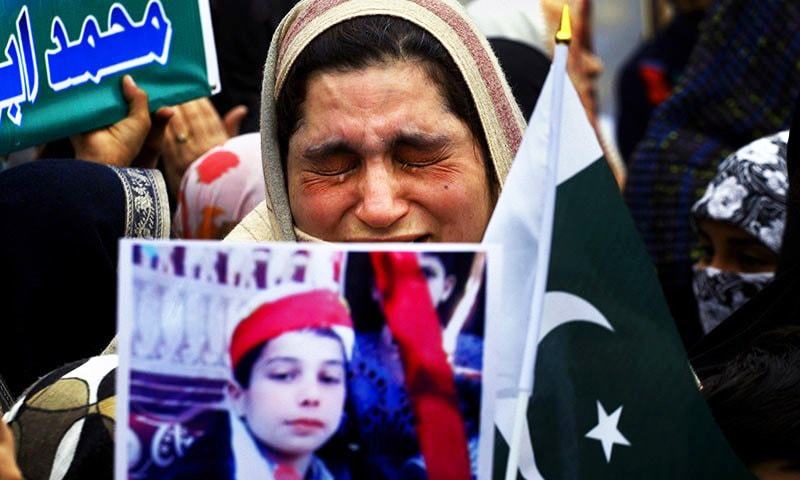 The myth of ‘martyrdom’: How our state glorifies death

Say Balochistan and the first thing that comes to the mind of an average middle-class Pakistani â€” who reads newspapers and watches news channels â€” is natural resources. Talk about KP and Fata, and it may very well end up in a discussion about the strategic importance of the region.

The discourse about terrorism is still all about the nefarious designs of an ambiguous enemy that is hell bent on destabilising the country. Such is the callous nature of the state narrative that the one thing that is missing from it is the only thing that matters the most: people.

The tragedy of our times is that people are not talking about themselves but things.

The things we have constructed ourselves.

The things that donâ€™t breathe, fall in love, feel pain, pleasure and cry like us.

And such is the triviality of these things that when I die, they wonâ€™t even exist for me.

In any case, they start with you and I, and end with us. Not the other way around.

Letâ€™s start with us.

With us who are alive and with us who are dead. I feel horrified when they tell me that the Civil Hospital bombing in Quetta was actually an attack on CPEC, and an attempt to destabilise the country.

I feel horrified because I â€” who died in the carnage â€” am not at the centre, but a road. A road made of tar and gravel. A thing.

I tremble when they tell me that terror is subsiding because terrorists are now attacking â€˜soft targetsâ€™.

I tremble because the world around me â€” the land, the country, the military installations, the airports and the buildings â€” exist for me, with me and by me.

Then how can I â€” a human who laid the foundations of those things â€” be a soft target and the things the real target?

I feel numb with pain when they put me on the high pedestal of martyrdom, and call me a hero for perishing in a senseless carnage.

I feel numb for all I â€” a human â€” wanted to do was to live, love, grow old and die in the midst of my loved ones. I did not perish with my consent.

The modern state is significantly different from the empires and the kingdoms of yesteryear in that it holds sway over the mental attitudes of its subjects in a much more influential manner. To borrow from Nietzsche, the modern state is the new idol that seeks worshippers, heroes and martyrs around it.

Sacrifice is one of the most sublime human acts that necessitates full knowledge of the circumstances and willingness on the part of someone who opts for it.

An uninvited death is always a tragedy, not a sacrifice.

Some two million people died during the Partition while running away from their homes for their lives. The states on both sides of the border hailed them as martyrs who sacrificed their lives for their homeland.

It did not end there.

See: The concept of martyrdom

In Pakistan, the glorification of death runs so deep that the mercilessly-killed children in Peshawar’s Army Public School were termed heroes who supposedly sacrificed their lives.

The strategic depths dug by the state are so deep that even after swallowing hundreds and thousands, they wouldnâ€™t fill up. They howl for more people who can be termed â€˜heroesâ€™ by gravediggers.

Thereâ€™s an imaginary Raah-e-Haq (the right path) that we are told to tread and lay down our lives for.

The right path, however, remains illusory.

From the depth to the road, the right path has taken many ways. All that has remained the same is people perishing on this path. And it will remain the same until we figure out the most fundamental question we are confronted with today:

Is it the country that owns people or is it people that own the country?

Letâ€™s end with us: the people. With us who can breathe and fall in love and feel pain, pleasure and cry.