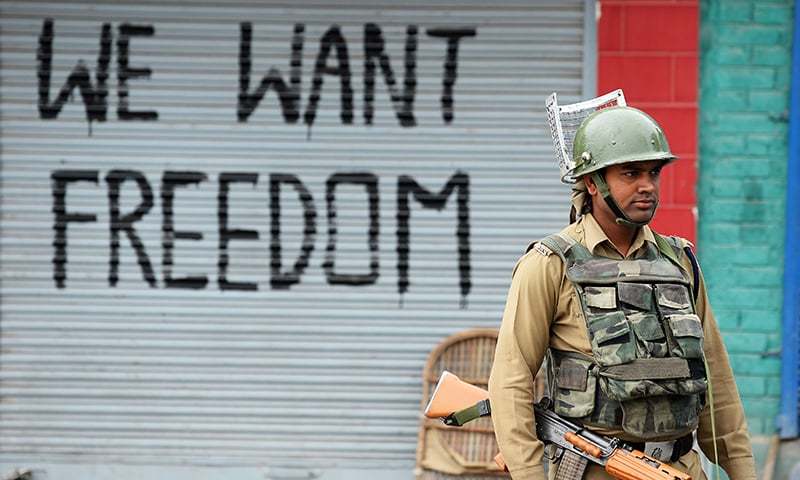 ISLAMABAD: Adviser to Prime Minister on Foreign Affairs Sartaj Aziz on Friday briefed the ambassadors of permanent members of the United Nations Security Council (UNSC) and the European Union regarding the human right violations being committed by the Indian forces in occupied Kashmir.

â€œThe adviser deplored the lethal use of force by the Indian occupation forces against innocent Kashmiri people,â€ said the Foreign Office spokesperson.

â€œHe conveyed serious concerns over the bloodshed in India-occupied Kashmir which has taken a toll of more than 80 innocent Kashmiris since July 8 and inflicted injuries to more than 7,000 people.â€

The spokesperson added â€œoppressive measures by India cannot deter the valiant people of Jammu and Kashmir from their just struggle for their right of self determinationâ€.

Aziz, on the occasion, regretted Indiaâ€™s refusal for holding talks on the issue with Pakistan.

He also briefed the ambassadors over the exchange of letters between the foreign secretaries of the two countries.

â€œThe international community, especially the permanent members of the UN Security Council and the European Union have an important role to uphold the principles of human rights and international humanitarian law,â€ said the adviser to the prime minister on foreign affairs.

He urged the ambassadors present on the occasion to fulfill their international commitments to the people of India-held Kashmir under the UNSC resolutions.

â€œPakistan welcomes the UN Secretary Generalâ€™s offer and would be ready to engage in a dialogue to resolve the Jammu and Kashmir dispute,â€ reiterated Aziz.

The P5 and EU ambassadors stressed for a peaceful resolution of the issue and acknowledged the importance of dialogue.

The Organisation of Islamic Cooperation (OIC) last week expressed concern over gross human rights violations and unabated killings in India-held Kashmir and renewed its call for resolution of the dispute through peaceful means.

However, India recalled its earlier position that the OIC had no locus standi in the matter.

In the worst civilian violence to hit the restive region of Indian-held Kashmir since 2010, at least 70 Kashmiri civilians have been killed and thousands more injured in Indian-held Kashmir in clashes with security forces after the killing of a prominent Kashmiri separatist leader Burhan Wani, in a military operation on July 8.

Wani, a 22-year-old commander of Kashmir’s largest pro-independence militant group Hizbul Mujahideen (HM), was killed along with two other separatists during a gun battle with Indian government forces. Indian paramilitary soldiers on patrol after a day long curfew in Srinagar. â€”AP

Wani joined the HM group at the age of just 15, and was viewed as a hero by many in Kashmir. The state’s former chief minister Omar Abdullah tweeted after his death that he had become the â€œnew icon of Kashmir’s disaffectedâ€.

HM is one of several groups that for decades have been fighting around half a million Indian troops deployed in the region, calling for independence for Kashmir or a merger with Pakistan. Indian paramilitary soldiers patrol during curfew in Srinagar. â€”AP

Kashmir has been divided between rivals India and Pakistan since 1947, but both claim the territory in its entirety.

Tens of thousands of people, mostly civilians, have died in the fighting since 1989.

Violence had sharply declined in recent years following a major crackdown by the hundreds of thousands of Indian forces deployed in the region.

But a recent uptick in militant attacks has galvanised frustrated young Kashmiris, majority of whom deeply resent the Indian military’s presence.