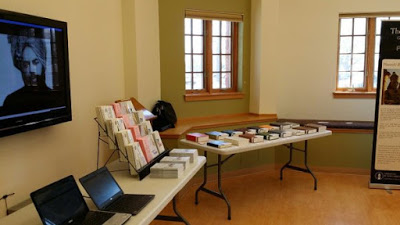 You might be able to guess that by the traditional clothing he wears, his beard or the way he talks. But he would prefer if his actions spoke louder than stereotypes and first-glance impressions.

â€œI follow my religion, and people often ask me about Islam,â€ Malick said. â€œI want to represent Islam for what it really is. My actions and being a good person will guide people and tell them what Islam is, what it is I believe.â€

There are between 60 and 70 Muslim families in DeKalb and between 400 and 500 Muslim students at NIU. A 2015 estimate made by The Pew Research Center estimated that there are approximately 3.3 million Muslims living in the US and that Islam is the worldâ€™s fastest growing religion.

To answer questions and start an interfaith dialogue, a Holy Qurâ€™an Exhibition took place July 16, at the Sycamore Public Library, 103 E. State St. Representatives from the Chicago Northwest chapter of the Ahmadiyya Muslim Youth Association, an auxiliary wing of the Ahmadiyya Muslim Community, met with locals to give an introduction to Islam and educate and dispel common myths and misunderstandings about the religion.

â€œWe held the event to answer questions and clarify misconceptions about Islam,â€ Iftekhar Ahmad, national assistant director for outreach and president of the local Ahmadiyya Muslim Youth Association, said. â€œWith everything that is happening in the world â€“ attacks, violence and bombings â€“ we wanted to tell the truth of what our religion is really about. We have more in common with other religions than you might think. If we focused on that common ground instead of our differences, the world would be a better place.â€

Jake Swick of Sycamore, a junior at Northern Illinois University, attended the exhibition with friends and discussed his experiences studying in Africa for three and a half weeks this summer.

â€œMy experience in Africa showed me how not to be biased and to look beyond race and religion,â€ Swick said. â€œWe are all equal, and there are good and bad people in all religions. Weâ€™re all in the same boat, with the same situations. If we just recognized that, it would be a much better world to live in.â€