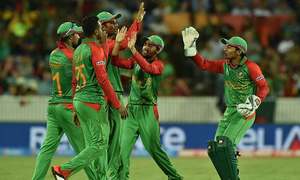 DHAKA: Bangladesh will host their first one-day international series against Afghanistan in late September in preparation for the arrival of the England team, according to the president of their cricket board.

Nazmul Hassan said that the Afghan team, who are based in India, had agreed to play three ODIs at Dhaka’s Sher-e-Bangla National Stadium on September 25, 28 and 30.

The matches will be the first ODIs hosted by Bangladesh since last year when they won series against Pakistan, India, South Africa and Zimbabwe.

Bangladesh and Afghanistan have never played a bilateral series in any format but they have played each other in tournaments, including last year’s World Cup when Bangladesh cruised to a 105-run victory in Canberra.

England are due to arrive in Bangladesh on September 30 for three ODIs and two Test matches despite concerns over security.

Tamim out for a month with fractured finger.Bangladesh opening batsman Tamim Iqbal fractured a finger during training on Saturday and will be out for up to a month.

The left-hander suffered the injury to the little finger of his left hand and will likely have to sit out the series against Afghanistan, the countryâ€™s cricket board said.

Bangladesh are hopeful the 27-year-old will be fit before England arrive to tour the country for a series comprising three ODIs and two tests, starting on October 7.

â€œWe have time. He should be able to start batting in four weeks.â€