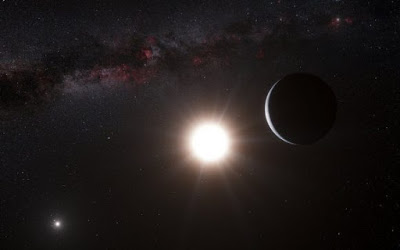 The hunt for exoplanets has been heating up in recent years. Since it began its mission in 2009, over four thousand exoplanet candidates have been discovered by the Kepler mission, several hundred of which have been confirmed to be â€œEarth-likeâ€ (i.e. terrestrial). And of these, some 216 planets have been shown to be both terrestrial and located within their parent starâ€™s habitable zone (aka. â€œGoldilocks zoneâ€).

But in what may prove to be the most exciting find to date, the German weekly Der Spiegel announced recently that astronomers have discovered an Earth-like planet orbiting Proxima Centauri, just 4.25 light-years away. Yes, in what is an apparent trifecta, this newly-discovered exoplanet is Earth-like, orbits within itâ€™s sunâ€™s habitable zone, and is within our reach. But is this too good to be true?

For over a century, astronomers have known about Proxima Centauri and believed that it is likely to be part of a trinary star system (along with Alpha Centauri A and B). Located just 0.237 Â± 0.011 light years from the binary pair, this low-mass red dwarf star is also 0.12 light years (~7590 AUs) closer to Earth, making it the closest star system to our own.