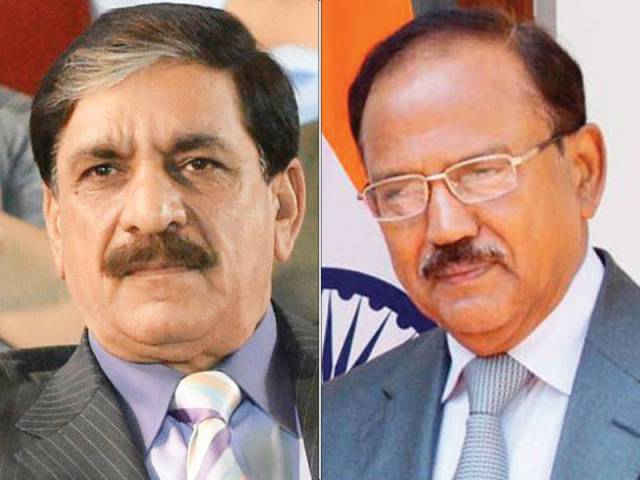 Tensions are running high between Pakistan and India since the Sept 18 Uri attack. But behind-the-scenes efforts are ongoing to de-
escalate the situation. Officials familiar with these efforts have revealed that the national security advisers from Pakistan and India spoke on the phone twice during the last 48 hours.

The contact between Lt Gen (retd) Nasser Khan Janjua and Ajit Doval was aimed at defusing the current standoff that virtually brought the two hostile neighbours to the brink of war. A senior Pakistani official, who didnâ€™t wish to be named, told The Express Tribune that Janjua and Doval had â€œcandid and frank discussionsâ€ on the current strain in relations between the two countries.

Pakistan will win any war against India

It wasnâ€™t immediately clear who initiated the move, but key international players, particularly the United States, are believed to be pushing the two neighbours to re-engage.

Doval was told in categorical terms that while Pakistan sought de-escalation of tensions with India, it would hit back hard if the neighbouring country attempted any military misadventure, said the official.

Janjua also conveyed Pakistanâ€™s displeasure to Doval over Indiaâ€™s â€œmalicious campaignâ€ of falsely implicating Islamabad in the Uri attack in which 18 Indian soldiers were killed.

Asked whether such contacts would help soothe frayed tempers on both sides, the official said the fact that the two NSAs have spoken to each other was itself a positive development.

Prime Ministerâ€™s Adviser on Foreign Affairs Sartaj Aziz confirmed the NSAsâ€™ contact. They have agreed on the need to defuse tensions, Aziz told The Express Tribune.

Despite his optimism, there is no change on the ground. Pakistan Army said Indian troops violated the ceasefire at the Line of Control (LoC) along three different sectors on Monday.

Pakistan and India have been engaged in a vociferous verbal duel since the attack on an Indian military base in Uri, in disputed Kashmir region which New Delhi blamed on Pakistan-based Jaish-e-Muhammad militant group without any evidence.

Pakistan vehemently denied any role and insisted the Uri attack was either a â€˜false flag operationâ€™ or it was carried out by Kashmiris to avenge the atrocities being committed by Indian security forces in the occupied valley.

Last Thursday, India claimed that its troops had carried out â€˜surgical strikesâ€™ against alleged â€˜terror launch padsâ€™ on the Pakistani side of the LoC.

Pakistan, however, rubbished the Indian claim and said Indiaâ€™s mischaracterisation of routine cross-LoC fire was aimed at diverting global attention from the uprising in Kashmir.

On Saturday, the army took local and foreign journalists to forward locations and areas where India claimed it carried out the so-called surgical strikes. The purpose of the rare visit facilitated by the ISPR was to give firsthand account to journalists about the situation on the ground at the LoC that otherwise remained off-limits for the media on both sides of the de facto border.

India itself has not yet come up with any compelling evidence to back its claim of carrying out surgical strikes.

International commentators have also started questioning the Indian assertion saying Indian forces lacked the skill to conduct such a sophisticated and swift operation in a highly militarized zone.