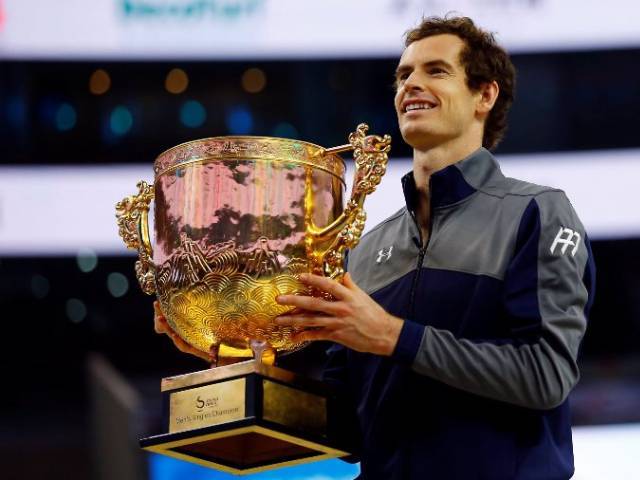 The Scot did not drop a single set in the entire tournament and romped to victory in straight sets on a chilly night in the Chinese capital.

The 29-year-oldâ€™s victory moves him 1,000 points closer to long-reigning world number one Djokovic, with the chance of taking the top spot by year-end and capping off a career-best season.

â€œIt was probably my best match of the week,â€ said Murray.â€Considering the conditions were fairly cold, I was still serving over a hundred miles an hour on some second serves.

â€œI felt using good variation on that shot, so I didnâ€™t give him a chance to really attack me there and that was probably the thing that I did best tonight.â€

Dimitrov, who had received a free pass through the semi-finals after Canadian Milos Raonic pulled out with an ankle injury, was left overwhelmed by the Scot. â€œI just didnâ€™t feel that I had another gear,â€ Dimitrov told reporters.

Murray is the 16th player in the Open era to win at least 40 titles and the fourth active player to accomplish the feat, joining Djokovic, Rafael Nadal and Roger Federer. 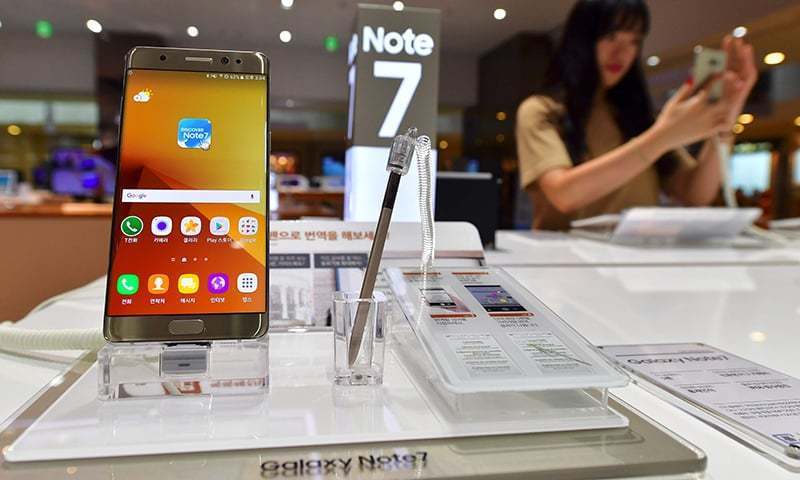 SEOUL: Samsung issued a global recall of the Galaxy Note 7 smartphone on Friday, putting sales of the device to a stop after it investigated reports about units with exploding batteries.

The latest addition to the Note series went on sale in some markets, including South Korea and the United States, on Aug 19.

“There have been 35 cases that have been reported globally,” Samsung said in an official statement, adding that it had conducted a thorough inspection with suppliers to identify possible affected batteries in the market.

Units which have already been sold will be replaced by the company in the next few weeks, Samsung said.

Shipments of the Galaxy Note 7 smartphone were delayed in South Korea this week for extra quality control testing. The move came after reports that batteries in some of the jumbo smartphones exploded while they were being charged.

Yonhap News said five or six explosions were reported by consumers. It cited pictures of severely damaged phones shared in local online communities, social media and YouTube. The photos and accounts could not be immediately verified.

There were no confirmed reports of any injuries.

The number of the Galaxy Note 7 phones with a faulty battery accounts for “less than 0.1 per cent” of the products in the market and Samsung is discussing how to resolve the issue with Verizon and its other partners, the official told Yonhap.

The battery issue is a fresh blow to Samsung’s smartphone business that has been on a recovery track.

Despite the investigation in South Korea, Samsung went ahead with its scheduled launch Thursday of the Galaxy Note 7 in China.

It is unusual for Samsung to confirm a delay in sales of a device, and rare for it to cite a quality issue.

“Every year, there have been accidents of battery explosions but it is the first time that six or seven cases happened within such a short period after the launch of a new product,” said Ha Joon-doo, an analyst at Shinhan Investment Corp.

The Galaxy Note 7 smartphone is the latest iteration of Samsung’s Note series that feature a giant screen and a stylus.

The Note series smartphones are one of the most expensive lineups released by Samsung and usually inherit designs and features of the Galaxy S series that debut in the spring. Samsung also added an iris scanner to the Note 7, which lets users unlock the phone by detecting patterns in the eyes.

Even before the issue of battery explosions emerged, supplies were not keeping up with higher-than-expected demand for the smartphone. 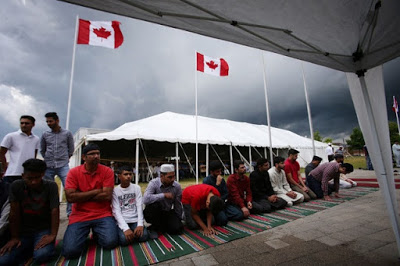 Recently a widely published study claimed that mosques and Islamic schools are filled with extremist literature. As a Canadian Muslim who has been involved in dozens of anti-radicalization discussions, forums, and interfaith events, to me this study was outrageously disheartening.

Exactly which mosques is this study referring to? Which libraries? Definitely not my mosque. Not the dozens that Iâ€™ve visited in my nearly two-decades of living in this great country. Iâ€™ve been attending my local mosque since I can remember and it has instilled the values of peace, love and justice, within me and countless other Muslims.

Over the past few years, unfortunately Muslims have been blamed for supporting violent ideologies, and not speaking out enough.

These sentiments, however, are questionable, as Muslims in Canada have made significant contributions in showing loyalty to Canada â€” whether through such iconic campaigns as Million Pounds of Food, or countless annual blood drives and city cleanups. All of the hard work, and countless hours spent spreading peace, and now all of a sudden comes a report defaming an entire religious group and labelling its mosques as breeding grounds for terrorism.

The study cites that former intelligence analysts led the study and claim to have based their findings on research conducted quietly in mosque libraries and Islamic schools. As someone who has visited the largest mosque in Canada, Baitun Nur Mosque, and lives minutes away from the largest mosque in the GTA, I have never even remotely seen anything of that sort, let alone to the scale they have mentioned. 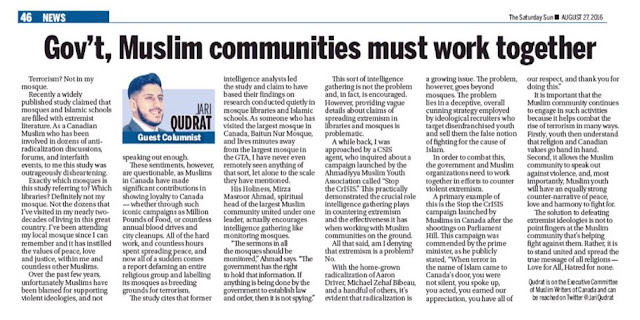 â€œThe sermons in all the mosques should be monitored,â€ Ahmad says. â€œThe government has the right to hold that information. If anything is being done by the government to establish law and order, then it is not spying.â€

This sort of intelligence gathering is not the problem and, in fact, is encouraged. However, providing vague details about claims of spreading extremism in libraries and mosques is problematic.

A while back, I was approached by a CSIS agent, who inquired about a campaign launched by the Ahmadiyya Muslim Youth Association called â€œStop the CrISIS.â€ This practically demonstrated the crucial role intelligence gathering plays in countering extremism and the effectiveness it has when working with Muslim communities on the ground.

All that said, am I denying that extremism is a problem? No.

With the home-grown radicalization of Aaron Driver, Michael Zehaf Bibeau, and a handful of others, itâ€™s evident that radicalization is a growing issue. The problem, however, goes beyond mosques. The problem lies in a deceptive, overall cunning strategy employed by ideological recruiters who target disenfranchised youth and sell them the false notion of fighting for the cause of Islam.

In order to combat this, the government and Muslim organizations need to work together in efforts to counter violent extremism.

A primary example of this is the Stop the CrISIS campaign launched by Muslims in Canada after the shootings on Parliament Hill. This campaign was commended by the prime minister, as he publicly stated, â€œWhen terror in the name of Islam came to Canadaâ€™s door, you were not silent, you spoke up, you acted, you earned our appreciation, you have all of our respect, and thank you for doing this.â€

It is important that the Muslim community continues to engage in such activities because it helps combat the rise of terrorism in many ways. Firstly, youth then understand that religion and Canadian values go hand in hand. Second, it allows the Muslim community to speak out against violence, and, most importantly, Muslim youth will have an equally strong counter-narrative of peace, love and harmony to fight for.

The solution to defeating extremist ideologies is not to point fingers at the Muslim community thatâ€™s helping fight against them. Rather, it is to stand united and spread the true message of all religions â€” Love for All, Hatred for none.