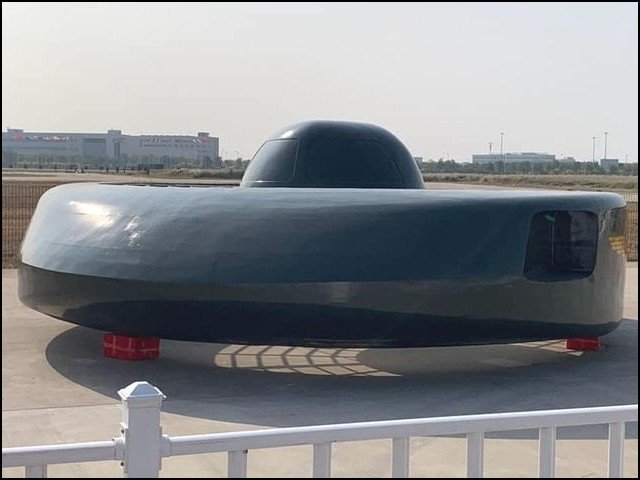 China finally made a UFO.

Beijing: Yesterday, the fifth annual exhibition of helicopters ended in Tianjin, a city in southeastern China. The defence department of China also presented a “flying saucer” at this exhibition. In reality, this is not a UFO, but it is the prototype of the latest helicopter which will go through the trial flights in the coming year, 2020.  END_OF_DOCUMENT_TOKEN_TO_BE_REPLACED 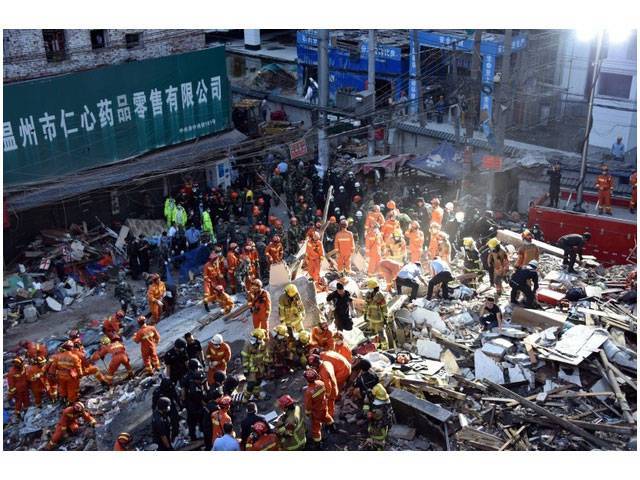 Eight people were killed after a group of houses collapsed in China on Monday, local authorities said.

The four buildings caved in during the early hours in Wenzhou in the eastern province of Zhejiang, the Lucheng district government said in a social media posting.

Eight people were found dead and five had been rescued by midday Monday, it said, without giving indications of the numbers missing.

The official Xinhua news agency said rescuers were still verifying the number of people trapped under the debris. It reported earlier on social media an â€œinitial estimateâ€ that more than 20 people had been buried.

The cause of the collapse is under investigation.

Pictures from the scene showed workers in orange suits sifting through a mountain of ruins.

China has seen several building collapses in recent years, with some blamed on low quality construction.

In May, 16 people were reported dead after a residential building in Guizhou province in the southwest collapsed due to landslides.

Two people were killed and 24 injured in April when a storm brought down a wholesale market building in Foshan city, in the southern province of Guangdong. 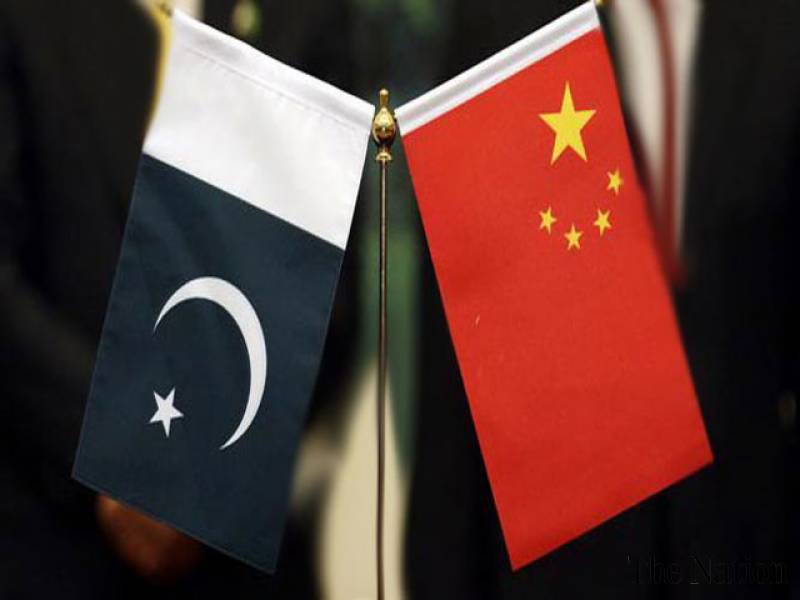 WUHAN – China yesterday came up with a fresh offer to support energy and infrastructure projects in Sindh province as the Asian giant continues to stand with Pakistan amid uneasy ties with the United States â€“ the global superpower.

Chinese authorities in the industrial Hubai province pledged to support the Sindh governmentâ€™s proposals to settle the energy crises and improve the infrastructure.

Member standing committee of the Communist Party of China Yu Shaoliang told a delegation of the Pakistan Peopleâ€™s Party led by Senator Sherry Rehman here that the â€˜iron brotherâ€™ will be ready to extend support in energy, construction and shipping sectors.

Lately, Pakistan has signed several agreements with China to further boost the bilateral ties between the two countries in various fields, including energy and basic infrastructure sectors.

China intends to invest more than $46 billion in energy and infrastructure projects in Pakistan till 2017-18 of which $15 billion investment is anticipated in infrastructure projects only. These include Lahore-Karachi Motorway, Karakorum Highway and expanding the capacity of Gwadar Port. In the transportation sector, the railway line from Karachi to Peshawar would be modernized and upgraded.

The China-Pakistan Economic Corridor Secretariat was inaugurated in Islamabad on August 27, 2013. CPEC is likely to get funding from the Asian Infrastructure Investment Bank.

The bank was being set up on the proposal of Chinese President Xi Jinping to support the developing countries of Asia region for construction of their basic infrastructure.

The name â€˜Corridorâ€™ suggests a gateway or a passage that connects the two countries, continents or regions. This â€˜economic corridorâ€™ will not be the first in history. The use of sea and land routes has assisted in the globalization process of opening Asia, as early as the 19th century.

The project received a major boost when control of Gwadar was transferred to Chinaâ€™s state-owned China Overseas Ports Holding in February 2013. Built by Chinese workers and opened in 2007, Gwadar is undergoing a major expansion to turn it into a full-fledged deep-water commercial port.

Pakistan and China have signed agreements for constructing an international airport at Gwadar, upgrading a section of the 1,300-kilometre Karakorum Highway connecting to Islamabad and laying a fibre-optic cable from the Chinese border to the Pakistani city of Rawalpindi.

With the development of the corridor, Central Asia, traditionally an economically closed region owing to its geography and lack of infrastructure, will have greater access to the sea and to the global trade network.

Physically, the corridor is a 2,700-kilometre highway that stretches from Kashghar to Gwadar through Khunjrab. But in essence, these road and rail links will further strengthen the bond of brotherhood, as highlighted by the two governments.

Pakistan serves as an important ally for China in the South Asian region. Pakistanâ€™s geographical location puts it on the main route connecting China and the Middle East and China and Central Asia.

For economic and strategic connectivity with these regions, China requires safe passage through Pakistan especially after Chinaâ€™s growing share in the world trade.

Yu Shaoliang said China considered Pakistan a close friend and was interested in its development in all sectors. He referred to the ongoing and past projects being completed or completed by the Chinese professionals.

The member standing committee of the CPC said that Hubai authorities strongly believed in development and industrialization and were equally ready to help the â€˜Pakistani friends.â€™

He said the Chinese companies were already developing Gwadar sea port in Balochistan. He also offered cooperation in technical training and higher education sector for Sindh and Balochistan.

Senator Sherry Rehman said the PPP-led Sindh government was keen to develop Ktbander as sea port and Chinese cooperation would be helpful in this regard.

Earlier in the day, the PPP delegation had a detailed meeting with Provincial Development and Reforms Commission of Hubai province. During this meeting with Hubei provincial government officials, Sherry Rehman proposed to declare the Chinese city of Wuhan the twin city of Karachi.

The Commission was represented by Deputy Director General Liu Qi Gang, and included the divisional ministers for Foreign and Economic Trade, and Transportation among others.

The two sides also discussed economic reforms, industrial growth as well as a host of other development related initiatives taken by the Hubei province. Wuhan city, where the meeting took place is popularly known as the â€˜Chicago of Chinaâ€™ owing to its multibillion trade economy.

In her opening remarks, Senator Rehman cited the similarity between industrial cities in Pakistan and China, particularly those where river economies were challenged by rapid climate degradation as well as industrial misuse.

Other recommendations floated during the meeting included the establishment of a foundation that will select and finance small and medium sized enterprises that will be managed by experts and technology sharing between the two countries.

Sherry Rehman suggested China should look into microfinance ventures in Pakistan, which offers a very effective regulatory framework compared to other countries.

The PPP delegation is scheduled to leave for Beijing today (September 7) to meet with think tanks and CPC leadership.

During the ongoing visit, the PPP delegation also held a meeting with Ethnic Affairs Commission and Religious Affairs Bureau in Urumqi â€“ the capital of the Xinjiang province.

The Chinese authorities claimed there was no unrest in the province and the development work was being carried out like other parts of the country. 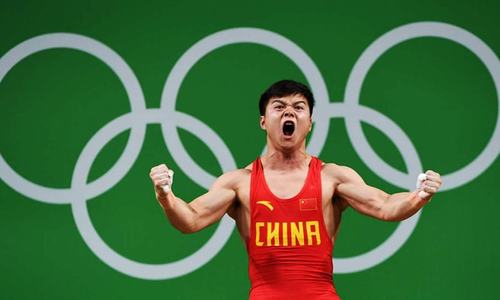 MOSCOW: China is facing a one-year ban from weightlifting over repeated doping cases in a move which threatens to stop some of the worldâ€™s top athletes from competing internationally.

The International Weightlifting Federation (IWF) confirmed on Thursday that three failed retests of drug test samples from the 2008 Beijing Olympics will lead to Chinaâ€™s automatic ban â€” if the cases are proven and the athletes in question disqualified by the International Olympic Committee.

IWF spokeswoman Lilla Rozgonyi told The Associated Press that the positive tests for gold medallists Cao Lei, Chen Xiexia and Liu Chunhong, all announced on Wednesday, were enough for a ban under rules adopted by the IWF board in June.

â€œIt happens automatically. The vote was already taken so now we only need to receive the closed cases from the IOC to proceed,â€ Rozgonyi said in an e-mail.

China is the worldâ€™s dominant country in weightlifting, having topped the medal table at every Olympics since 2000. It won seven medals in Rio de Janeiro this month, five of them gold.

Along with China, IWF said that Ukraine and Azerbaijan have joined Russia, Belarus and Kazakhstan, which were already facing one-year bans under earlier announcements.

Wednesdayâ€™s announcements took Ukraine to three failures from retesting, with four for Azerbaijan. At least six lifters from each of Belarus and Kazakhstan have failed Olympic retests, with seven for Russia.

Between them, those countries won 14 medals in Rio, meaning that next yearâ€™s world championships in Malaysia could have a significantly depleted field if none of them are allowed to compete.

Russia was already banned from Olympic weightlifting in Rio after the IWF ruled that its numerous doping cases and allegations of a state cover-up had brought weightlifting into â€œdisreputeâ€.

Weightlifting is fighting a severe doping crisis, with as many as 16 medals from 2008 and 13 from 2012 likely to be stripped following failed drug retests.

In addition, last yearâ€™s world championships in Houston saw mass drug test failures and one medal from the 2016 Olympics has already been taken away after bronze medallist Izzat Artykov of Kyrgyzstan tested positive for the banned substance strychnine.