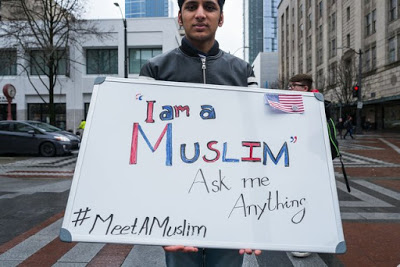 Ahmad Bilal, Faiez Ahmad and Luqman Munir couldnâ€™t have been better positioned to talk about being Muslims than the cultural crossroads of Fourth Avenue and Pine Street in downtown Seattle on Saturday.

The trio, all members of the Ahmadiyya Muslim Youth Association, took part in the organizationâ€™s â€œMeet a Muslim Day,â€ an effort in cities around the country to dispel myths about Islam and put a human face on a population thatâ€™s been the subject of stereotypes, public suspicion and in extreme cases, threats and violence.

For three hours on a showery Saturday, the men stood among the throngs of tourists and St. Patrickâ€™s Day parade spectators at a corner of Fourth and Pine with a sign that read, â€œI am a Muslim: Ask me anything.â€

At Westlake, 30 or 40 people stopped by to speak with Bilal, Ahmad and Munir, including people whoâ€™d come for the parade, making for a vivid, impromptu cultural exchange.

The men showed off mobile-phone pictures of them posing with smiling, green-clad parade revelers.

They said they even had a productive discussion about Islam and Christianity with a man standing a few feet away holding a sign imploring onlookers to â€œrepent and believe the gospelâ€ of Jesus Christ.

They invited the man to visit their mosque. He agreed to come, Bilal said.

While concerns about Islamophobia and the need for greater Muslim outreach have run high since the 9/11 terrorist attacks, the controversy over President Donald Trumpâ€™s original and recently revised restrictions on certain Muslim immigrants and refugees gave those issues new urgency.

Violence and threats with religious overtones have become a pressing issue for other faiths, too. A spike in threats and incidents involving Jewish community centers, synagogues and cemeteries has put the nationâ€™s Jewish community on edge.

In Kent, police are searching for a suspect who shot a Sikh man in whatâ€™s being investigated as a possible bias or hate crime, and in Kansas, two Indian computer engineers were shot by a gunman who yelled â€œget out of my country.â€ One of the victims in that shooting died.

Recent studies by the Pew Research Center show that most Americans donâ€™t personally know a Muslim and that Americans are generally â€œcoolerâ€ toward Islam than other religious faiths. But getting to know someone who is Muslim leads to warmer feelings and more positive attitudes, their research suggests.

For Bilal, Ahmad and Munir, participating in Saturdayâ€™s event served as an opportunity to show that true Islam is about people like them, not the violent extremists who tend to capture headlines.

The menâ€™s bold act comes on the heels of a visit to that very intersection in February by U.S. Marine and Muslim-American Mansoor Shams, who traveled the country with his own â€œAsk me anythingâ€ sign to encourage conversation about Islam with non-Muslims.

Bilal, who is Pakistani, said he lives with a host family in Seattle that once harbored negative attitudes about Islam, but having contact with him has changed their views.

The men know they wonâ€™t be able to end Islamophobia by themselves, but Munir is optimistic that events like Meet a Muslim Day will make a difference.

The menâ€™s provocative sign asked passers-by to â€œask me anything,â€ which might have led to some pretty awkward conversations. But most people simply expressed support rather than take them up on that offer.

â€œOne lady asked me, â€˜Do you want a hug?â€™â€ said Munir, a 25-year-old recent engineering grad. He said yes and the woman gave him a warm embrace.

Earlier, as Bilal walked to Westlake, a different woman who noticed the sign called out â€œI love you,â€ so Bilal shouted â€œI love you back.â€ 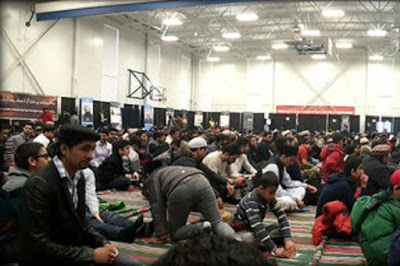 World leader of the Ahmadiyya Muslim community arrives in Toronto Monday for a month-long national tour.

Youth in the local Ahmadiyya Muslim Jama`at community are hoping a visit from the Caliph will help dispel misconceptions about Islam as the world continues to battle terrorism.

Hazrat Mirza Masroor Ahmad, the fifth Caliph whoâ€™s been at the helm of the Islamic community since 2003, arrives in Toronto Monday as part of a month-long national tour during which heâ€™ll interact with politicians and members of his congregation.

The visit coincides with Ahmadiyyaâ€™s 50th anniversary in Canada.

While expectations are high for the Islamic community for which the Caliph is the equivalent of the Pope in the Catholic church, young people want to use the opportunity to show that radicalism has no place in true teachings of Islam as a religion.

â€œExtremists always misquote the Qurâ€™an for their own political agenda,â€ said Blawal Alem, a youth in the Toronto Ahmadiyya community.

He and other youth in the community have chosen to â€œpreach through actions,â€ organizing food drives, community cleanups and sports activities in an effort to promote peace and harmony where they live.

â€œThose who are influenced to join extremists are troubled individuals,â€ said Alem. â€œThey just need a sense of belonging.â€

Youth in the Ahmaddiya community have been at the forefront of campaigns promoting peaceful coexistence between Muslims and other members of society. Initiatives such as Meet a Muslim Family and Fast with a Muslim Friend last year have helped change negative views on Islam.