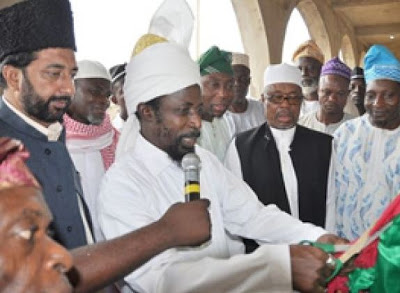 The Ahmadiyyah Muslim Jamaâ€™at Nigeria (AMJN) yesterday in Abuja celebrated its 100th year of establishment in Nigeria, with a call on the citizenry, especially Muslim women to be at the forefront of the fight against insurgency.

The Amir (President) of AMJN, Dr. Mashood Adenrele Fashola, made the call at the 39th annual convention of the Lajna Imaillah, Nigeria, which is the female wing of the organisation.

He said no nation can attain greatness without the full participation of its women and that they had a big role to play in the fight against insurgency and corruption which are the biggest challenges facing the country.

â€œIslam is a religion of peace and Muslims are known for peace, tolerance and accommodating among other virtues. Though we have some in form of extremism like the Boko Haram insurgents, they are not representing Islam and Muslims. If we look carefully, we can see that it is more of political than religion. Let the Boko Haram insurgents come out if they have a good cause, let them come out and tell us their sponsors,â€ Fashola said.

National Ameerah of Ahmadiyya Dr. Basirat Olajumoke Dikko, told participants at the convention that their faith alone cannot lead to a revolution, but that it is their actions and the prayers after being accepted by Allah that can bring about revolution in the world.