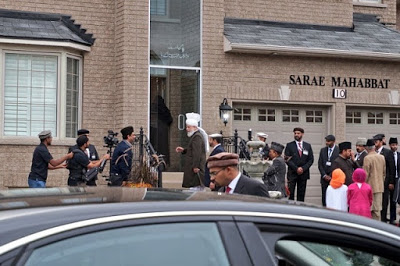 The Caliph will be in Canada for six weeks. His trip will include a visit to Ottawa, where heâ€™ll meet Prime Minister Justin Trudeau and members of the local Ahmadiyya community.

The leader of millions of Ahmadiyya Muslims arrived in the Greater Toronto Area this evening, touching off joyous celebrations among the faithful.

Shouts of â€œAllahuakbarâ€ â€” God is Great â€” rang out in the area known as Peace Village in Vaughan Monday when Hazrat Mirza Masroor Ahmad, Caliph of the Ahmadiyya community, arrived.

Over 10,000 followers gathered as he began his six-week Canadian tour.

â€œToday is a very, very important day because I am seeing the Caliph for the first time,â€ said Waseema Khurran, 36, who was waiting with her 2-year-old son. â€œI am so happy I cannot describe it.â€

The area was decorated festively for the Caliphâ€™s visit. Houses were draped in strings of light and children singing songs to welcome the Caliph wore red and white and waved Canadian flags.

â€œWelcome Huzoor,â€ (beloved) read a sign held by a girl to greet the Caliph.

For the national president of the Canadian Ahmadiyya chapter, Lal Khan Malik, the Caliphâ€™s visit was like a rebirth for him.

â€œThe world is obsessed with disorder, fear and restlessness,â€ he said. â€œLove for all and hate for none (the Caliphâ€™s main message) is the key. The world needs this message and value.â€

Estimates of the numbers of Ahmadis around the world range from 10 to 20 million. They have faced persecution in many parts of the world, including some Muslim countries where theyâ€™re regarded as heretics.

â€œIn certain countries such as Pakistan and a lot of Muslim countries we face persecution,â€ said Hena Malik, who was part of the crowd welcoming the Caliph. â€œIn a country like Canada this is where we believe Islamic rights are followed.â€

The Caliph arrived at the Peace Village in a motorcade, as his followers strained eagerly to see him.

Umair Khan, the national president of the Ahmadiyya Jamaica chapter, traveled from the Caribbean to accompany members of the Jamaican government who were also attending.

â€œWith the negative image of Islam right now â€” Jamaica is very Christian â€” the only interaction theyâ€™ve had with Muslims has been the negative things they see in the media,â€ said Khan, adding he was hoping to counteract that by showing the government members his faith up close.

The Caliph will be in Canada for six weeks. His trip will include a visit to Ottawa, where heâ€™ll meet Prime Minister Justin Trudeau and members of the local Ahmadiyya community.