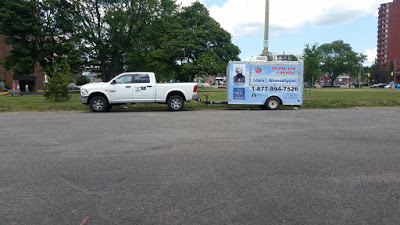 Canada: #MobileMuslims in the Sault

Canada: #MobileMuslims in the Sault

The Ahmadiyya Muslim Jama`at Canada has launched a nationwide campaign called #MobileMuslims, in which a mobile exhibition will be driven coast-to-coast to spread the true, peaceful teachings of Islam and remove misconceptions about the religion by stopping at various cities along the way.

In a world where unjust extremism is rampant, it is essential for Muslims to speak out and take the message of â€œLove for All, Hatred for Noneâ€ across the country. Through this mobile-exhibition we wish to celebrate all the freedoms and opportunities we enjoy as Canadian Muslims. The mobile exhibition will depart St. Johnâ€™s, Newfoundland and travel across Canada to finish its journey in Vancouver, British Columbia.

The journey is expected to last about 40 days and an exhibition will be set up in more than 25 Canadian towns and cities.

â€œThis is our way of showing gratitude to our great country,â€ said Mr. Lal Khan Malik, National President of the Ahmadiyya Muslim Jama`at Canada. â€œThrough this campaign, we aim to bridge gaps and remove misconceptions by taking the true, peaceful message of Islam from coast-to-coast.â€

The Ahmadiyya Muslim Community is a dynamic and fast-growing international revival movement within Islam. Founded in 1889, the Community spans over 200 countries with membership exceeding tens of millions. The Community is the only Islamic organization to believe that the long-awaited Messiah has come, in the person of Mirza Ghulam Ahmad (1835-1908) of Qadian, India, its founder. Ahmad claimed that God had sent him, like Jesus, to end religious wars, condemn bloodshed, reinstitute morality, justice & peace, and, most importantly, to teach mankind how to re-establish aÂ personal relationship with God.