A Muslim cleric, who had announced a Rs 51 lakh reward for anyone who cut off Hindu Mahasabha leader Kamlesh Tiwari’s tongue for insulting Prophet Muhammad in Bijnor, was charged with rape on Friday by the Uttar Pradesh Police. 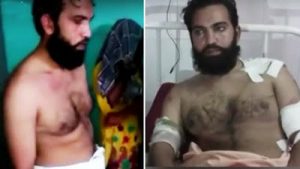 A case was filed against Maulana Anwar-ul-Haq, a cleric in Jama Masjid in Chah Siri, after a video showing him in a semi-naked state getting beaten byÂ public for having been caught sexually asaulting a girl in a hotel room went viral on social media, IANS reported.

The girl told the police that her family took her to Haq as they thought she was being controlled by evil spirits. Following this, Haq raped her on Aug. 24 on the pretext of doing a physical examination. The girl and her family had assaulted the cleric in retaliation.

The police has registered a case against the cleric for rape and conspiracy to harm the victim. He has not been nabbed yet.

IANS quoted sources as saying that Haq was bullying the police claiming that he was close to Chief Minister Akhilesh Yadav.

With Assembly elections in the offing, the state police have been vigilant and strict about taking action against those who were charged with rape ever since the Bulandshahr gangrape case where a mother and daughter were attacked by highway robbers. The incident had garnered massive outrage and criticism against the law and order situation in the state.