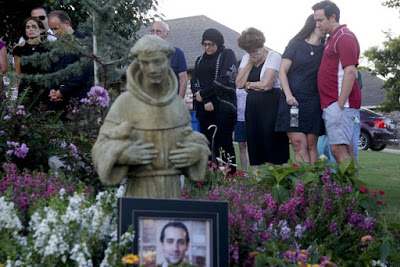 Khalid Jabara was shot and killed on Aug. 12 outside his home in Tulsa, Oklahoma.

Hundreds of mourners gathered at a church in Tulsa, Oklahoma, on Thursday to memorialize Khalid Jabara, a 37-year-old who was shot and killed on Aug. 12 in an apparent hate crime.

Eber recalled Jabaraâ€™s character saying, â€œHe was funny, a person people liked, friendly, gregarious, someone who brought a joy when there was darkness.â€

The Jabara family are Orthodox Christian, and Khalidâ€™s parents immigrated to the U.S. in the early 1980s from Lebanon. They settled in Tulsa to raise their three children where they started a family catering business, but there was trouble in the community.

According to a statement released on Facebook by Jabaraâ€™s sister, Victoria Jabara Williams, the family had experienced years of verbal and physical assaults by their neighbor, Stanley Vernon Majors.

Police arrested Majors for the attack and charged him with felony assault. But despite warning signs of Majorsâ€™ antagonism toward the family, policereleased him from custody several months ago so he could await trial in March 2017.

On Aug. 12, Jabara called the police, â€œstating this man had a gun and that he was scared for what might happen,â€ Williams said in her statement. Police showed up but left the neighborhood without questioning Majors. Less than ten minutes later Jabara was shot and killed outside his home.

Majors is now in police custody, again, on suspicion of first-degree murder.

â€œWe can learn to love our enemy, but not on our own,â€ Eber said during the memorial. â€œI have been asked by the news media to label this. I look to history. We havenâ€™t stopped these wars, these atrocious murders.â€

Jabaraâ€™s killing has received national attention as yet another tragic and dangerous incident of xenophobia. Democratic presidential nominee Hillary Clinton released a statement on Thursday, responding to Williamsâ€™ Facebook post:

Victoria, my heart breaks for you and your family over the loss of your brother Khalid. An attack like this is an attack on all of us, and we must come together to ensure that no other family loses a beloved son or daughter because of prejudice and bigotry.

Muslim American activist Linda Sarsour set up a LaunchGood campaign on Monday to raise money for the Jabara family. So far, more than 300 people have made contributions, totaling nearly $20,000. The funds will go toward providing home health care for Jabaraâ€™s father, who relied on his son as caretaker.

â€œWe will not be silent. Letâ€™s stand against hate and show our support for Khalid and his family,â€ Sarsour wrote on the fundraiser page.

The shooting comes at a time when the U.S. is facing rising xenophobia, often aimed at Muslims, Arabs and those perceived to be such.

â€œMy family lived in fear of this man and his hatred for years,â€ Williams said in reference to Majors.

â€œOur brother Khalid was just 37 years old and had his whole life ahead of him. He was a kind spirit, loving brother, uncle and son. Khalidâ€™s heart was big,â€ she wrote. â€œAll of that has been taken away from us by this hateful man and a system that failed to protect our community.â€