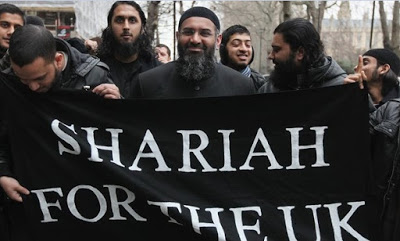 For years Islamic extremist Anjem Choudary has played a cat and mouse game with the police. His hate filled speeches never getting close enough to convict him of stirring up trouble or so it would seem.

He advocated support for the Taliban, Al Qaeda and all forms of terrorism against Western targets. Lately he has been acting as a recruiter for Islamic State and getting people to swear allegiance to its leader Baghdadi.

It is reckoned Choudary is responsible for 500 British Jihadis going out to the Middle East to link up with Islamic State.

It did not take long for a jury to convict Anjem Choudary and an associate. It is not his hate speeches that have finally brought him down but his support and endorsement of Islamic State. When speaking to Sky News about his speeches Choudary said he was merely exercising his freedom of speech on such things as Sharia and that he posed a threat to no one.

Choudary will appear in the dock at the Old Bailey and will face 10 years in prison.