It was in the August of 1947 that Pakistan got its independence, and the 2nd head of Ahmadiyya Muslim Community at the time His Holiness Mirza Bashiruddin Mahmood Ahmad worked side by side with Muhammad Ali Jinnah the founder of Pakistan. And at times when Jinnah had given up on the idea of Pakistan he forced him to rejoin politics and work for the cause of Muslims in the Indian subcontinent.

After the creation of Pakistan in 1947 most of the Ahmadiyya community migrated from India to Pakistan and settled in several major cities of Pakistan including Lahore, Karachi and many others.

After migrating from India, the biggest phase for the Ahmadiyya Muslim community came when they had to find a suitable location as the new community center in Pakistan. The job of finding an appropriate location as the center was given to Choudhry Aziz Ahmad Bajwa, who was a session Judge in Sargodha at the time. 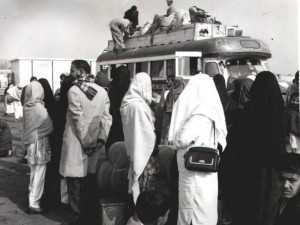 On 18th October 1947, the 2nd head of Ahmadiyya Muslim Community, Mirza Bashiruddin Mahmood Ahmad himself came to Sargodha from Lahore in order to view the site. On his orders a request to acquire the land of Rabwah was made to Deputy Commissioner Jhang by Nazir-e-Ala Sadar Anjuman Ahmadiyya Pakistan. It was put forward to the Deputy Commissioner Jhang in Bangla Lalian on 18th October 1947.

The land was then unknown and was spread over an area of 1506 acres and was known as Chak Dhiggyan. Out of the 1506 acres, 472 were inhabitable as it included a main road, railway line and hills. Nonetheless, the rest 1034 acres were barren it could be used for building accommodation.

The Government registration was completed after the cost of the land was paid into the Jhang Government Fund on 27th June 1948. By 15th October 1948 1,000 canals had been leased out to over 500 community members. 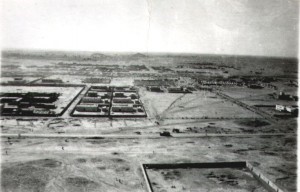 The Naming of Rabwah

A meeting headed by 2nd Caliph of Ahmadiyya Mirza Bashiruddin Ahmad on 16th September 1948, concluded that the opening ceremony of the new center will take place on 20th September. The question of what to name the center also came under review and His Holiness Mirza Bashiruddin Mahmood Ahmad accepted the name ‘Rabwah’ (meaning a high place or a hill,) which was suggested by Molana Jalal Uddin Shams.

After the opening date was settled Sadar Anjuman and Tehrik-e-Jadeed started planning for the big day. For this two groups were sent to Rabwah to setup camp, the first camp was setup by Ch. Abdus Salam Akhtar & Molana Ch. Muhammad Siddique. Before the opening day along with the grand marquee six residential camps were also built on 19th September.

The Inauguration of Rabwah 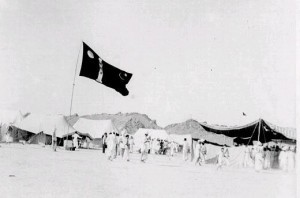 20th September was the big day when the city was officially inaugurated by the respected His Holiness Mirza Bashiruddin Mahmood Ahmad. He made his way from Lahore to Rabwah for the inaugural ceremony. Several other community members also travelled along with him. The inaugural ceremony was attended by over 600 members of the community who made their way from adjoining cities like Chiniot, Ahmad Nagar, Lalian, Faisalabad (Lyalpur), Sargodha, Kasur, Sialkot and several others.

Zuhr prayers were also lead by His Holiness and a Mosque was built at the same place in 1953 where those prayers were offered. Today this mosque is part of the Fazl-e-Omar Hospital. The residents and visitors to the hospital also offer prayers at the mosque.

After the inaugural speech given by His Holiness Mirza Bashiruddin Mahmood, 4 goats were sacrificed at four ends of the city. His holiness permanently moved to Rabwah on 19th September 1949. On 3rd October he laid the founding stone of Mubarak Mosque, the first Mosque of Rabwah.

The Growth of Rabwah 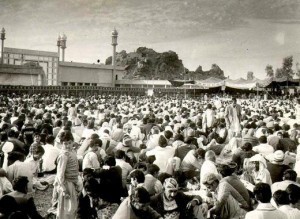 In March 1949, The Railway Station for Rabwah was approved. In April, Nusrat Girls High School was moved from Lahore to Rabwah, this was the first educational institution in Rabwah. The first Jalsa Salana in Rabwah was held from 15th “ 17th April 1949 which was attended by 16,000 people at that time. Fazl-e-Omar Hospital started its operation on 21st April from a small camp which was under the supervision of Dr. Mirza Munawar which was later supervised by Dr. Hashmatullah. Later that year on 14th September, work on the first and only Post Office was started. 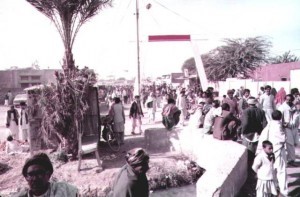 Temporary community offices were set up at the time of inauguration, and permanent offices were set up in 1950. On 31st May 1950 His Holiness Mirza Bashiruddin Mahmood Ahmad laid the founding stones of following buildings: Taleem-ul-Islam High School, Qasr-e-Khilafat, Tehrik-e-Jadid Offices, Sadar Anjuman Ahmadiyya, and Lajna Imaullah. In September 1950, Rabwah was divided into several different neighborhoods which were named as the following:  Dar-ul-Yaman, Bab-ul-Abwab, Dar-ul-Nasar, Dar-ul-Barkat, Dar-ul-Rehmat, Dar-ul-Sadar, and Dar-ul-Fazal.

Jamia Nusrat for Women was inaugurated on 14th June 1951 which was later moved into Lajna offices and in 1953 moved to its current place. On 21st may 1951 the first phone connection was given out while the first Telephone exchange was setup in 1957. In 1954 Electricity came into the town and on 9th June 1954 the first electric connection was put up. 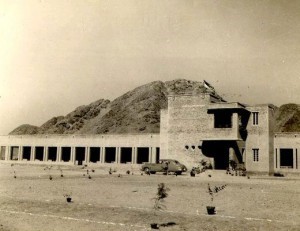 The founding stone of building of Fazl-e-Omar hospital was laid down on 20thFebruary 1956 by His Holiness Mirza Bashiruddin Mahmood Ahmad. 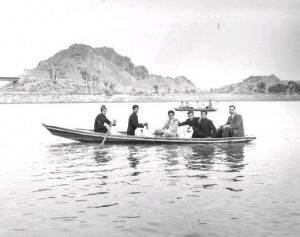 Taleem ul Islam Colleges founding stone was laid down on 26th June 1953. On 7th November 1954 the college moved from Lahore to its new premises in Rabwah. TI College was officially inaugurated on 6th December 1954 by His Holiness Mirza Bashiruddin Mahmud Ahmad.

There are no events at this time.