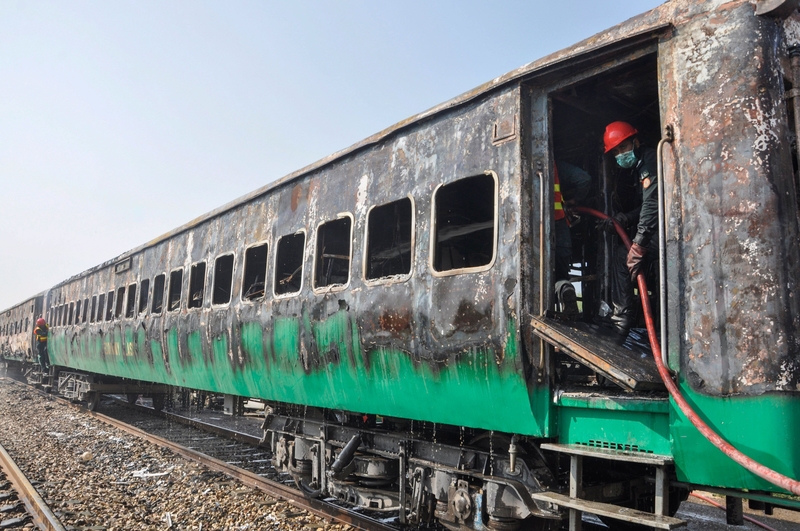 The broader issue is the appointment of utterly incompetent people in extremely important positions.

Trains in Pakistan have seen countless accidents since 1953. They all leave the whole nation in mourning and today’s event has been a very terrible one.

A research lists down the major railway accidents that have made the nation over and over again.

The “International Railway Journal” wrote on August 20, 2019, that Pakistan Railways has reached its highest-ever revenue for the 2018-19 financial year that is of Rs 54.6billion ($US 340.5million). It says that it is Rs10 billion more than what it was in 2017-18. Due to pay increases, the company was forced to see higher costs in 2018-19 of Rs6 billion, increased pension contributions, and increasing fuel charges. But still, the company as able to cut its yearly shortfall by Rs4 billion. It was Rs36 billion in 2017-18 and it went to Rs 32 billion in 2018-19. At its workshops in Lahore and Islamabad, it renovated 24 passenger trains. These new trains became the source of attraction for some 8 million passengers, thus generating additional revenue of Rs 5billion. In total, now the total rail passengers of Pakistan Railways have increased to 70 million.

In Pakistan, the chief mode of transportation has been railway has until 1970s. Its peak time was between 1955 and 1960, and during that period, 73 percent of the country’s cargo traffic was handled by Pakistan Railways (it went down to less than four percent in 2015).

Fatal railway accidents have always been a part of Pakistan Railways despite keeping high targets.

Here is the list of the most disastrous Pakistan-related train accidents and some details:

• In 1969, the Liaqatpur railway accident killed more than 80 people.

• On the night between January 3 and January 4, 1990, there was a train crash at Sangi village, some 15km from Sukkur near Pannu Aqil Cantonment, killing 350 people.

• In Pakistan’s 67-year history, one specific incident is unmatched in its disastrous effects.

“Los Angeles Times” reported that the Multan to Karachi, Bahauddin Express passenger train that had 16-carriage and 1,408-seat was overcrowded. And on the television, bodies placed in rows were displayed covered up in blankets near the wreckage. The reports say that the train accidently went on the wrong track and hit a 67 carriages luggage train parked in a village station.

700 people were left injured in the disaster of the train overturning and some cars getting crushed under it or being ripped open.

After the investigation, a charge of manslaughter was placed on three staffers at Sangi station and the railway staff was found directly responsible for the disaster.

• On June 8, 1991, American news agency “Associated Press” reported that a jam-packed passenger train crashed into a cargo train, resulting in the death of about a 100 people. The Karachi-Lahore-Islamabad express bumped into the freight train parked about 400 miles north of Karachi at the Ghotki station.

• In November 1992, a passenger train at the Ghotki railway station rammed into a cargo train, killing 54 people.

• On March 3, 1997, a train crash near Khanewal city killed 14 people and left about 100 injured. Officials say that a train going to Karachi failed to stop at a junction and six carriages derailed. To avoid some serious casualties, it was diverted onto a dead-end track.

• On July 13, 2005, Karachi Express missed a signal and hit another train Quetta Express at Ghotki station. This caused a huge loss of 110 deaths. Several cars derailed due to the clash and then a third train (Tezgam) hit the derailed trains. In total, 3000 people were travelling in these three trains. Some reports say that around 500 people were killed.

• In August 2005, in the Karachi Division near Landhi, an upcountry Super Parcels Express derailed when it was crossing the Malir Bridge. The big damage was done to eight of the carriages because an axle broke owing to over-loading.

• In August 2006, near Domeli, a station 33 kms before Jhelum seven coaches of Lahore Express were derailed. Four of the coaches fell into a 50 feet gorge.

• In February 2006, a Karakoram Express, going to Lahore was derailed near Bahawalpur killing one person and injuring 30 others.

• Again in February 2006, a Chinese container train transporting chemicals crashed about 180 kilometers from Karachi into a stationary oil train. This caused some spark, but it did not prove fatal. A northbound goods train hit an oil train standing on the track and a fire broke out. The blaze burned about 18 wagons of the goods train, and some oil also trickled out at the scene.

• In December 2007, a train derailed from its tracks near the town of Mehrabpur in Sindh and 50 people were killed in this accident. About14 out of the total 16 carriages derailed from their tracks, some of them crushed in the collision, other carriages simply slid down an edge into the water.

• In July 2013, a very fast train hit a motorcycle rickshaw in a place about 50 km from Gujranwala named Khanpur village. About 14 members of an extended family lost their lives in this accident.

• Also in July 2013 a train going to Rawalpindi got down from its track near Gujranwala, causing two deaths.

• In October 2014, an assistant driver was killed due to a crash of a freight train into a business train near Ran Pathani.

• On July 2, 2015, a train derailed near Gujranwala and three carriages of a special train were drowned into a canal, killing about 20 people in total.

• On November 17, 2015, Jaffar Express accidently got down from the track near a place in Balochistan called “Aab-e-Gum”. This took about 20 lives.

• On July 11, 2019, 21 people died in the Akbar Express accident at the Walhaar Station near Sadiqabad.