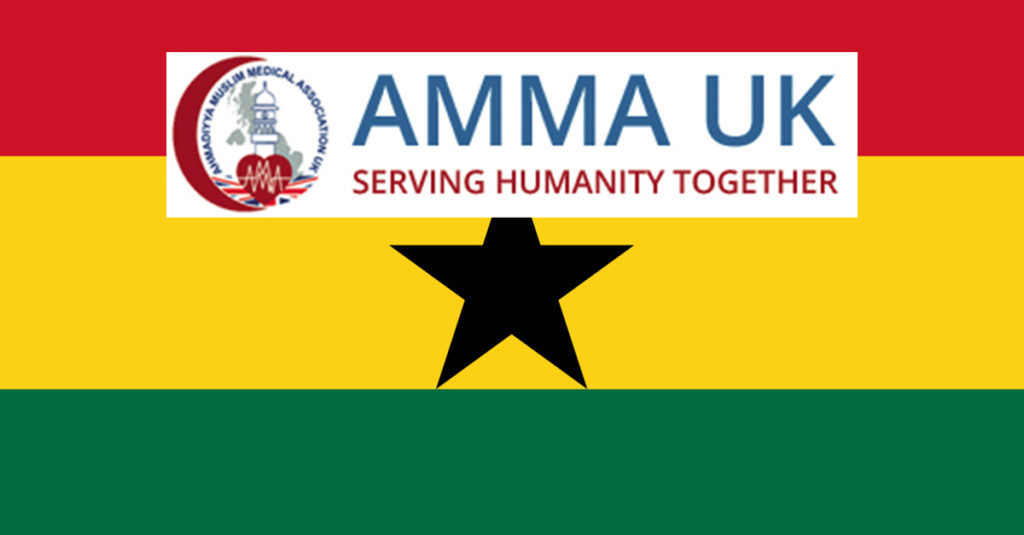 Ghana: Ahmadiyya Medical Association sent a team including an Ophthalmic Surgeon specialising in Paediatrics and an optometrist to Ghana of to set up an eye-camp. These lajna imaillah UK members did waqf e arzi in Ghana from 22 July till 2 August, 2019. At present, there are 7 hospitals and 2 clinics working in Ghana under Nusrat Jahan Scheme. There are not many facilities available in these hospitals for treating eye problems. But, there Ahmadi optometrists are there, who do regular eye-checkups at various functions and occasions.

The basic aim of this team is to provide the people who come to the Jama’at hospitals with remedies for their eye diseases, to inspect the eyesight of the students in the educational institutions working under Jama’at and to inform the people about the health of their eyes. The hospital management of Agona Swedru had announced that the arrival of a team of ophthalmology, so that the maximum number of people could benefit from them.

A 72-bed hospital is established in Agona in which the departments of medicine, surgery, diseases of women and gyne are working successfully, while there is no facility of treatment of the eyes. For this medical camp, an eye clinic was specially set up where the patients’ eyes were examined. Those people who were in need of using spectacles were given the eye weakness numbers. Some patients were recommended solutions for their eye problems. Those people were also given guidance who needed an operation.

Next to this, the AMMA team visited the local hospital of Agona where Ahmadi Optometrist works. The team, along with the hospital staff carried out a physical examination of the patients. In the meanwhile, they met the Chief Executive and Nurse incharge of the hospital and informed them about the motives of their trip. They also introduced them to Jama’at e Ahmadiyya. The team also carried out eye tests of the students of Ahmadiyya International School Bustan e Ahmad. On the first day, this clinic was setup in the mosque and on the second day, it was set up in a classroom. The eyes of 107 children were tested, 18 of which had a thorough inspection of their eyes and they were proposed cures for their diseases. The children with weak eyesight were allotted their eye numbers.

All of the 39 students of Jamia tul Mubashireen underwent this eye check up. 4 of them had detailed checkups. AMMA team also organized a training camp to educate the attendees about eye check up. They were told how an eye camp or eye clinic can be set up. These volunteers were given training and their questions were answered.

All because of Allah’s blessings, this trip was very successful. This was the first time that an eye-clinic was set up in Ghana. This waqf e arzi was completed successfully owing to the cooperation of Ameer sahib, the workers of the hospital, workers of Humanity First and the doctors posted in Ghana. May Allah reward them.