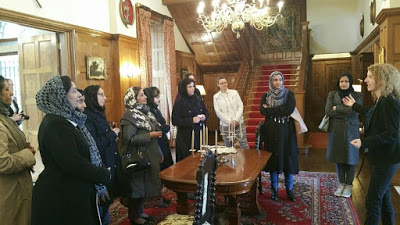 Scientology might be well known in the US and in East Grinstead but in the Ahmadiyya Muslim community very few people know about it. So when my friend Amelia Cavanagh invited me to visit her Church I arranged a group tour for Muslim ladies to see what they have to say. I was baffled before I even got out of my car as I beheld a giant mansion with beautiful paths lined with wide flower borders, surrounded by a feeling of calm and bliss.

We were welcomed with warm hugs and offered a place in the chapel to say our afternoon prayers before the welcome tea was served. A lot of attention was paid to ensure Islamic customs were respected. The drinks and the sandwiches were all halal and a female tour guide was arranged so we would feel more comfortable. Though the question answer session was supposed to be the last thing on the agenda the friendliness of the hosts encouraged even the shiest of our ladies to speak up and enquire about the views of scientology on different topics.

The tour started at the mansion which was the residence of the founder of Scientology, Mr L. Ron Hubbard. Each room was filled with history and antiquities and had beautiful views onto the 60 acre site that was kept in immaculate condition. We visited the winter garden, the library and the monkey room (why itâ€™s called that you will have to find out for yourself). Every room was beautifully arranged and kept true to its original design. Even all items on the desk in the office of Mr Hubbard were kept exactly as he had left them, including a 1966 magazine. We continued the tour to the castle which houses several study facilities and counselling rooms. Walking through the long galleries made me notice that every person I came across had a very calm expression on his face. Not only was everyone very polite and welcoming but it seemed like they were all in tune with themselves and had an aura of serenity. My friend Jilly also noticed this, saying â€œthe whole atmosphere around the estate was peaceful. There was so much I learned and facts which opened my mind to a different thought dimension. The hospitality was outstanding and I felt very welcomed, something I have not experienced at a place of worship before (apart from our own Mosques). I have understood the mysticism of Scientology moreâ€.

To conclude our tour we were offered a second tea and creamed cakes in the pavilion where we spoke about the philosophy of Scientology in more depth. Soon everyone realised how many things Islam and Scientology have in common. The role of religion is to help make us better people. I met good people on this tour who are good because they follow the teachings of their founder. I do not understand it when Scientologists are spoken ill about by followers of main stream religions only because their faith has a different structure. It is unacceptable in 21st century Britain to be judgemental about matters of faith. As my colleague Madiha commented â€œit was a great opportunity to build an interfaith relationship. We were pleased that they allowed us to pray in their chapel. And we were pleased to hear that we were the first group from the Ahmadiyya Muslim community who ever visited themâ€.

I organised this trip to a church of Scientology because we know so little about it. My religion teaches peace – and dialogue is a key component for the establishment of peace. We welcome people to visit the Baitul Futuh Mosque in Morden for that same reason â€“ so they can ask questions and understand our beliefs and hopefully draw the same conclusion that we drew today: weâ€™re really not that different after all. 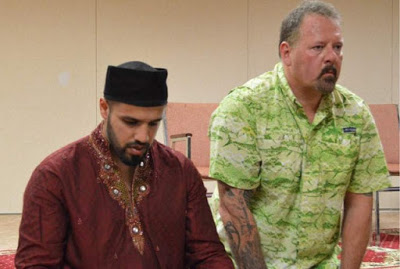 HARTFORD â€” Democrats are pushing a bill to toughen the stateâ€™s hate crime law and expand the number of groups protected, saying a series of high-profile incidents shows the changes are needed.

The bill would make the commission of a hate crime a felony, increasing potential penalties that could come with a conviction. Currently, hate crimes are classified as a misdemeanor by the state.

It would also make violence and threats based on gender prosecutable as a hate crime and make threats against houses of worship or other religious facilities a more serious felony charge.

Democrats have pointed to several recent high-profile events, including threats against Jewish community centers around the state, but Rep. William Tong, D-Stamford, said during an appearance Tuesday on WNPRâ€™s â€œWhere we Liveâ€ that incidents as far back as gunshots fired at a South Meriden mosque in 2015 highlight the need for the bill.

â€œIt just shows more solidarity,â€ he said Tuesday, adding support from public officials, religious leaders of other faiths, and community leaders has helped the Ahmadiyya community broaden its reach to share its message of peace. â€œIt certainly propels our peace-loving message into demographics that we cannot reach.â€

Tong and other Democrats said during a press conference last week that a number of recent incidents show why the bill, which is before the Judiciary Committee, is needed.

Along with the threats to the Jewish Community Centers, they also referenced a swastika that was painted on a Danbury home in November and a racial slur painted onto the Stamford home of an interracial couple last month.

In the Stamford incident, the family refused to clean the word from their garage in protest of the police departmentâ€™s inability to catch a suspect, saying it was not the first time their home was vandalized.

Tong said the U.S. has a â€œtragic experience with hate,â€ and referenced both slavery and the Japanese internment camps during World War II, but Democrats also said the bill is a response to actions and rhetoric nationally.

The change to a felony means a conviction can carry up to five years in prison, up from the one-year maximum allowed under state statute for misdemeanors. For offenses that are raised to a Class C felony, the maximum prison sentence is 10 years.

The bill would make the November 2015 incident in which a neighbor fired gunshots at the Baitul Aman mosque in response to the Paris terrorist attack a Class C felony. Ted Hakey, who fired the shots, was prosecuted by federal authorities, not at the state level.

The hate crime legislation quickly became the subject of partisan bickering after Democrats took several shots at President Donald Trump and didnâ€™t reach out to Republicans prior to their press conference last week.

â€œThe best way to combat hate is to show unity,â€ Senate Republican Leader Len Fasano, R-North Haven said in a statement last week. â€œThatâ€™s why itâ€™s so disappointing that Connecticut Democrats from the beginning chose to turn a certainly bipartisan issue into a completely partisan press conference today. Instead of working with Republicans to show a united front against hate crimes in our state, Democrats chose political theater. Instead of making today about standing together, Democrats made it about standing apart. Divisiveness cannot fight hate.â€

Adam Joseph, a spokesman for Senate Democrats, responded by questioning Republicansâ€™ desire to address hate crimes. He pointed to Republican proposals to cut education funding to sanctuary cities, require women to undergo transvaginal ultrasounds, among others, as indicators of his stance.

â€œProtecting people from hate crimes does not appear to be a priority for the Senate Republicans,â€ he said. â€œThey should stop complaining and start working.â€