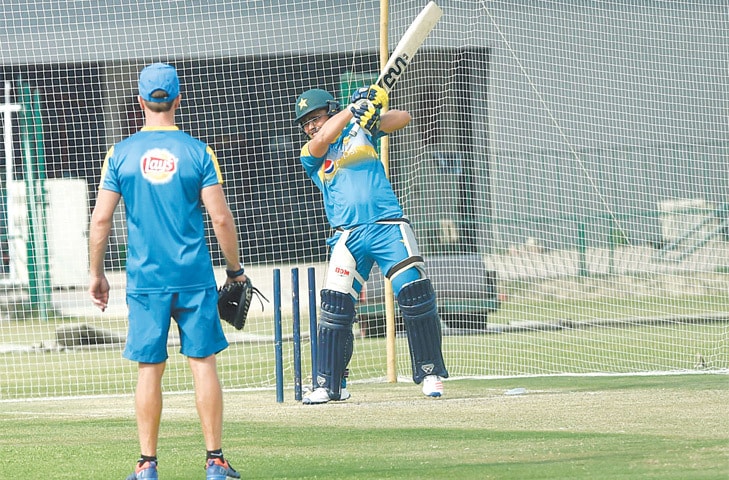 LAHORE: Ruling out any rivalry with ODI and T20 captain Sarfraz Ahmed, wicket-keeper/batsman KamÂ­ran Akmal who has made probables camp said on Tuesday that if selected he could even play as a batsman.

Talking to reporters here before the start of the training camp set up at the Gaddafi Stadium ahead of the West Indies tour, the long discarded Kamran said he had been focusing on his batting while stating that ODI skipper in Sarfraz was throwing up fine performances as a captain and as a player due to which no one could replace him.

â€œI will play as per the role given to me. You people might have observed that not only I have been focusing on my batting abilities but my batting has also improved over the last few years,â€ maintained the top-order batsman.

When asked there used to be a fierce rivalry between former wicket-keepers in Moin Khan and Rashid Latif, Kamran dispelled the impression stating that young wicket-keeper/batsman in Mohammad Rizwan also played along with Sarfraz before him.

â€œThe performance I gave as a batsman both in the domestic circuit as well as in the PSL makes me a strong contender for a place in the national team,â€ he further said.

On the other hand, there are reports the team management is aware of the fact that induction of Kamran, who was declared PSLâ€™s best batsman, best player and best wicket-keeper in presence of Quetta Gladiatorsâ€™ wicket-keeper Sarfraz, into the national side will put the T20 and ODI skipper under pressure.

Asked there were reports that he had not passed the fitness test, Kamran while rejecting those reports stated: â€œI appeared in the fitness test on Tuesday and succeeded in meeting all fitness standards. Also, I think trainer Grant Luden is the best man to answer your question.

â€œFitness has never been my problem as I hardly miss training,â€ Kamran claimed before stating that if selected his target would be to cement his place in the team by giving match-winning performance.

Meanwhile, left-arm fast bowler Rumman Raees Khan said he had his own style of celebration after claiming wicket, adding that it was good that some bowlers were copying him.

Rumman said he was happy that he had been invited to the probables camp after performing well in the domestic cricket and the PSL.

â€œThe coaching staff laid more emphasis on fitness level which would help Pakistan cricket in the long run,â€ remarked the fast bowler who said he enjoyed his second stint with the Islamabad United.

â€œI learnt a lot from the experience of former fast bowler Wasim Akram and ex-Australian batsman Dean Jones during the PSL,â€ the pacer further said.

Meanwhile, chief selector Inzamam-ul-Haq is likely to announce the Pakistan squad on Wednesday for the upcoming T20 and ODI series against the West Indies.

Dawn learnt that Inzamam is considering the option of naming the squad soon after or during the 50-over practice match at the Gaddafi Stadium on Wednesday.