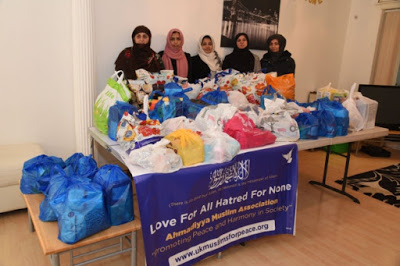 Siemah Ahmad, fourth from left, says Barking Ahmadi Muslims see it as their duty to donate to women’s refuges

The womenâ€™s Barking branch of the Ahmadiyya Muslims Association sent the food to secret locations across east London throughout last week.

Volunteer Siemah Ahmad, 38, said it was vital to reach out to domestic abuse victims as International Womenâ€™s Day fell on Wednesday.

â€œWeâ€™re helping women who are vulnerable in society,â€ she said. â€œThe women in our community want to share a message of peace and show we care about everyone in our community.

â€œIslam means peace and looking after all members of the community.â€