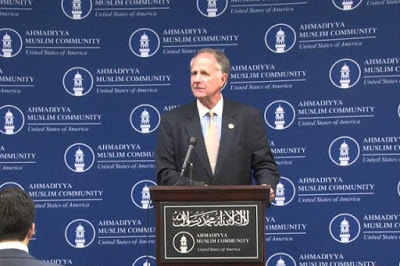 The bill titled the Pakistan State Sponsor of Terrorism Designation Act was introduced at a time when Prime Minister Nawaz Sharif was in the USA to address the United Nations General Assembly.

Congressman Poe served as the co-chair for the bipartisan â€œAhmadiyya Muslim Caucusâ€ during the 114th congress and was replaced by his Republican colleague Congressman Pete King for the 115th Congress. Thirty days after that, the secretary of state is supposed to submit a report confirming that Pakistan is in fact a State sponsored terrorist country and if not, then the justification of that decision.

They say the USA is in “a toxic relationship” with Pakistan and needs to “to finally set limits on its indulgence” towards Islamabad.

Congressman Poe chairs the House Foreign Affairs Committee’s subcommittee on terrorism, non-proliferation and trade, while Clad was a deputy assistant secretary of defence for Asia in the George W Bush administration.

Whatever method the USA chooses, “something must change in our dealings with a terrorist-supporting, irresponsible nuclear-weapons state”, Poe and Clad conclude.

Asking Washington to set the “limits of its indulgence” towards Pakistan, Poe and Clad commented: “Don’t let the next crisis in South or Southwest Asia deflect our focus”.

Pakistani, they argued, had become a “quasi-adversary, receiving hundreds of billions through the years in direct and indirect United States support”. “Acquiescing in the current trends is not an option”, they concluded. “And they have done things against the principal concerns we have; the Haqqani network and Taliban” Gen Votel said on Thursday.

However, contrary to the common perception, the commander of US Central Command has commended the Pakistan Army’s cooperation with the US military in recent counter-terrorism operations along the border of Afghanistan.

Here’s what they suggested in balancing “toxic terms” with Pakistan.

According to him, as long as these groups “maintain safe havens in Pakistan, they threaten long-term stability in Afghanistan”.

He said despite challenges with respect to the US-Pakistani relationship, there is a substantial level of engagement of the US troops with their Pakistani military counterparts. “It poses the greatest threat to coalition forces operating in Afghanistan”.

The Haqqani Network was formed in the late 1970s by Jalaluddin Haqqani.

The US designated the group as a terrorist organisation on September 7, 2012.