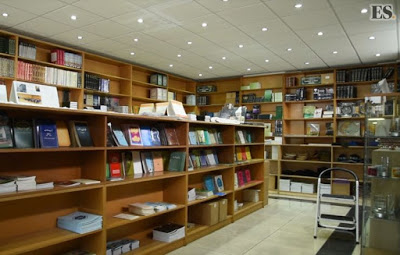 The Standard has gained exclusive access inside Britainâ€™s largest mosque to find out why security has been stepped up, how the mosque is recovering after fire damage, and who prepares behind the scenes for the arrival of 6,000 Muslims during Friday prayers.

â€œWe believe he came in India over 100 years ago, and he came really â€“ not to bring a new faith or a new teaching â€“ to re-establish the true teaching of Islam. He actually promoted the message of peace to the people of the world and he wanted to bring the communities together under a peaceful umbrella.â€

â€œIn Pakistan, our community has been persecuted. The laws were brought in that considered us non-Muslim in Pakistan and for us to declare ourselves Muslims or use any of the Muslim literature or declaration of faith â€“ that there is only one God and Muhammad is messenger â€“ carries a three-year prison sentence for any of our members.

â€œSo most of our mosques have been closed down, our members canâ€™t practice their faith and in fact, that seems to be spreading around some of the extremists around the world.â€

Also known as Morden Mosque, it was damaged in a large fire in 2015, which left one building in total disrepair. Reconstruction has begun, and volunteers arrive early on site to ensure Friday prayers donâ€™t cause a traffic pile up for local residents.

As Naseer tells the Standard, itâ€™s a busy operation running a mosque which serves several thousand people every day.

â€œToday is a school holiday so weâ€™re expecting about six, maybe seven, thousand people here today. Weâ€™ve got lots of car parks covered by our stewards to make sure they donâ€™t come here and cause traffic jams,â€ says Naseer.

â€œDemolition is going on at the moment because we had that fire back in September 2015 and, of course, weâ€™re now in a massive rebuilding programme to build something quite spectacular.â€

Besides being a space for prayer, Baitul Futuh Mosque also has its own 24-hour radio station, TV studio providing a live feed of Friday prayers, and space for the wider community to meet.

Upstairs in the kitchen, a team of chefs prepare meals for everyone who visits â€“ today 250 people have been for lunch.

â€œThereâ€™s been a constant feeding of people as they come in. Every time they come here, they know theyâ€™re going to get served a meal,â€ Naseer tells the Standard.

â€œOn the Friday and Tuesday nights, they prepare meals and package them and take them to feed the homeless in London. Thatâ€™s been going on for many years now.â€

On the other side of the site, visitors are queuing to get into the overflow prayer hall â€“ but first they must walk through a body scanner.

â€œBecause of the persecution of our community and attack on our mosques, in Pakistan in particular, security has been heightened,â€ Naseer explains.

â€œGenerally itâ€™s the same people who create havoc around the worldÂ are creating havoc for us â€“ either extremists on the Muslim side, or extremists on the other side. So we get it from both ends and therefore we have to doubly careful.

â€œFor us, itâ€™s not just a perceived threat, it is a real threat and therefore we take security very, very seriously.â€

The mosque also provides spaces for local schools to take exams and police officers to meet, and has its own library.

â€œWe want to make ourselves as open as possible â€“ as a mosque, as a complex, as a library â€“ and we have some four thousand school children visiting the mosque every year,â€ explains librarian Waleed Ahmed.

â€œItâ€™s something that we find the wider community being able to benefit from.â€

Watch the video below to see inside the Baitful Futuh Mosque.