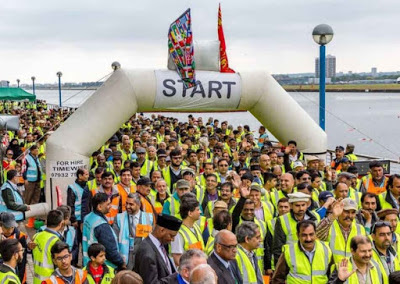 Members of Waltham Forestâ€™s Ahmadiyya community are calling on volunteers to get their walking boots on to raise charity cash.

The Ahmadiyya Muslim Elders Association will stage their annual Charity Walk for Peace on Sunday, May 14.

Fundraising efforts were launched at a special event in Stratford last Friday (March 3), attended by more than 300 guests and dignitaries.

The walk was first held in 1998, when it raised around Â£1,500. Since then, the event has raised more than Â£3.5 million for good causes, including the Royal British Legion and the Alzheimerâ€™s Society.

Last year a total of Â£504,000 was raised and this year several charities in Waltham Forest will be given proceeds from the walk, with volunteers hoping to raise around Â£750,000.

Mubasher Ahmad, of Erskine Road mosque in Walthamstow, said: â€œWe used to give to the larger charities but this year we really want to give to local grassroots charities.

â€œThat is the focus this year, weâ€™re looking to raise money for eight to 10 Walthamstow charities.

â€œIt is a very scenic route along the river, past the Emirates Air Lift and the Excel Centre, it is only about five miles and it is very flat, so it is very family orientated, anyone can do it.â€