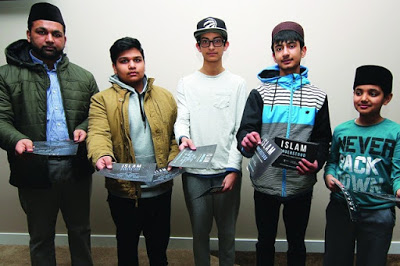 ‘Islam Understood’ the thrust of campaign

The Ahmadiyya Muslim Youth Association launched a nationwide campaign March 5 titled â€œIslam Understoodâ€ to provide Canadians with the opportunity to learn the true teachings of Islam.

At a local level, the Ahmadiyya Muslim Jamaâ€™at spoke with the Source about the campaign and the message that is trying to be portrayed.

Tariq Azeem, imam/missionary with the Ahmadiyya Muslim Jamaâ€™at in Lloydminster, said in the world right now there are many misconceptions regarding the faith of Islam.

â€œWe, our youth, has taken this challenge that we go door-to-door and we go town-to-town and remove these misconceptions,â€ Azeem said.

The Ahmadiyya Muslim Youth Association became involved because they are the first ones that need to be educated, Azeem said.

â€œYouth are the strength of any community that can go out and convey the message,â€ he said.

Azeem explained sometimes people hear things through the media or through social media, which is not true, but people start believing them.

â€œMany times regarding our faith people have not met with Muslims or had not had proper interactions with the Muslim in their life, but they are believing things that they have heard from the Internet or social media,â€ he said, and added they believe it is necessary people get their knowledge from the right source.

On March 5, Muslim youth canvassed in more than 65 towns as well as several downtowns in Canadian cities to speak with Canadians about the Islamic faith.

Although canvassing did not take place in Lloydminster, Azeem said some of the Muslim youth from the Border City travelled to North Battleford, which does not have a large Muslim community, to speak with locals about the faith.

â€œIt went quite well, there were different individuals, (and) majority were very happy and pleased to see that a Muslim group is going around spreading the message of peace,â€ Azeem said.

â€œOf course there are some people that are not always happy, but as mentioned it is necessary to give an opportunity to each individual to learn about different cultures and faiths.â€

To further spread the message of the faith, the Ahmadiyya Muslim Youth Association will be sharing their message on social media and at exhibits in over 100 Canadian cities.

To date, more than 50 open houses have been held across Canada.

On March 13, an Islam Understood Open House will be held at the Lloydminster Public Library from 6 to 8 p.m., and Azeem encourages people to attend the event and chat.

There will be a small presentation on various aspects of Islam and will provide opportunity for resident to ask questions, Azeem said.

â€œWhat they might have heard through social media or through other means, may it be regarding the teachings of Jihad, maybe the status of women in Islam, or how does Islam promote charity, or any other aspect of the religion, we encourage people to come and visit us and ask questions.

â€œThis is why we have held this event and we will not shy away from any answer. We encourage people that they openly ask any questions and they not be shy about it,â€ he said.

Azeem said he hopes to present the actual, true image of the Islamic faith.

Regarding recent incidents in Canada and neighbouring countries, Azeem said they find it necessary to get out and learn about other faiths.

â€œIslam is the largely most misunderstood religion in the world,â€ he said. â€œIf somebody just thinks about it, there are 1.6 billion people in the world that adhere to this faith.

â€œSo instead of assuming things towards 1.6 billion people in the world, we should give every culture, faith, (and) religion a chance and we should learn about it,â€ he said.