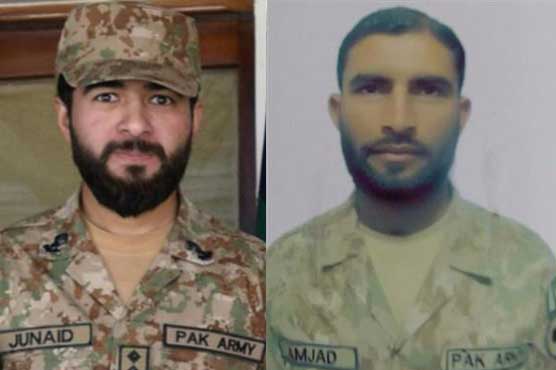 ISLAMABAD: Two Pakistan Army officials, including a captain, were killed during an exchange of fire on Tuesday in the Malikabad area of Swabi.

Security forces were conducting an intelligence-based operation (IBO) in the area when they came under attack, militaryâ€™s media wing Inter-Services Public Relations (ISPR) said in a statement.

The deceased were identified as Captain Junaid and Sepoy Amjad.

Immediately after the incident, the troops cordoned off the area while the exchange of fire continued till the filing of this report, the ISPR statement added.

The raid was being conducted under newly-launched Operation Radd-ul-Fasaad which was initiated after a wave of terroristsâ€™ attack across the country last month.
Meanwhile, at least five terrorists were killed in exchange of fire with troops in Swabi, ISPR said in a statement. â€œ5 terrorists who were killed during an IBO in Malikabad, Swabi today were planning to target educational institutions and judicial complexes,â€ it said.

â€œSacrifice of our Shaheeds will not go waste. Terrorist will be brought to their end and held accountable for their Fasaad,â€ the militaryâ€™s media wing quoted Army chief Qamar Javed Bajwa as saying.

In a message sent to media, TTP spokesperson Mohammad Khorasani said the outlawed terror outfit was involved in clashes with the security forces in Swabi.