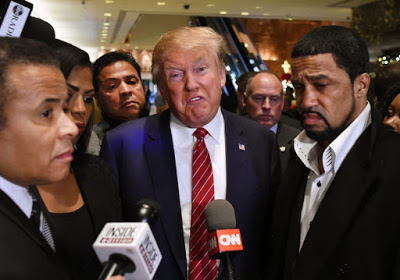 If President Trump does not bring the jobs back and the economy becomes worse, I fear that they will succumb to President Trump and blame Muslims for the problems that the country faces.

The 9th Circuit recently ruled against reinstating President Trump’s temporary executive order last month, which banned citizens of seven Muslim-majority countries from entering the United States. This was the right decision and contrary to what the Trump administration is claiming, this executive order was unconstitutional and discriminated against Muslims.

Trump adviser Rudy Giuliani revealed in an interview on Fox News that President Trump asked him how to do a Muslim ban legally and that this executive order was what they then formulated. President Trump has also referred to his actions as a ban on Twitter.

It is becoming increasingly evident that President Trump wants to wage a war against an entire group of people based on their religion. They number 1.7 billion and are the fastest growing religion in the world. Trump, who may be looking for a scapegoat, has chosen the wrong one.

This situation will only get worse. If, God forbid, a Muslim commits another terrorist attack on American soil or anywhere in the world for that matter, it will push President Trump to further extremes. In addition, one of President Trump’s advisors, Kellyanne Conway, has made up terrorist attacks that never happened. A few weeks ago, she cited the “Bowling Green Massacre”, something that never occurred. She has gone unpunished and President Trump has already incited more hatred against Muslims.

A Trump supporter massacred Muslims in Quebec, and two mosques were burned down in Texas and Washington state. President Trump has not condemned these attacks probably because they do not go along with his narrative in which Muslims are the enemy by definition.

Countless protesters have shouted the slogan, “Not My President” in the past few months. The truth is that President Trump does not even claim to be the President for Muslim-Americans. President Trump has made false claims that thousands of Muslim-Americans celebrated 9/11, repeatedly dismissed anti-Muslim bigotry among many policies that he proposed as a presidential candidate that targeted Muslims. However, he has never made a public visit to a mosque and has never shown a rudimentary understanding of the religion.

Many Ohioans voted for President Trump because of his populist ideas. If President Trump does not bring the jobs back and the economy becomes worse, I fear that they will succumb to President Trump and blame Muslims for the problems that the country faces.

Ohioans needs to remember that there is no war between Islam and America. Muslims have been in America since before President Trump’s paternal grandparents immigrated to America from Germany and before President Trump’s mother immigrated to America from Scotland. Indeed, thousands of African slaves who came to America were Muslim and they did not even want to come here. If we did not fear Muslims then, we should not fear them now.

Pope Francis said when asked about the worldwide populist surge that “Hitler did not steal power…He was elected by his people and then he destroyed his people.” It is time that President Trump to respect the judicial branch and stop his fear-mongering rhetoric before it is too late.

Have something to say about this topic? Use the comments to share your thoughts, and stay informed when readers reply to your comments by using the Notification Settings (in blue) just below.
_______________________
Zohaib Zafar, a Brecksville resident, is a student at Davidson College in North Carolina, where he is a member of the Muslim Student Association.