Perspective: Only through acts of solidarity we achieve real peace | Ijaz Ahmed 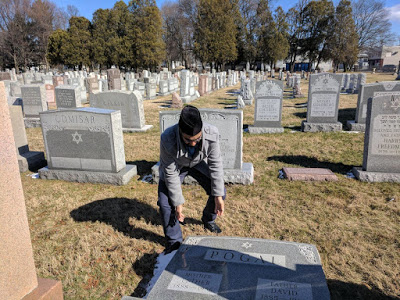 The Ahmadiyya Muslim Community launched the True Islam campaign (trueislam.com) to educate all American Muslims and non-Muslims about the true teachings of Islam.

Hundreds of tombstones were vandalized in a Jewish cemetery in Philadelphia over the weekend. Hearing about this was both shocking and upsetting. As a Muslim American, I condemn this cowardly act and pray that the culprits be brought to justice. With the wave of bomb threats to Jewish centers and this recent horrific act, we will stand by our Jewish brothers and sisters across the nation during this time.

In Islam, it is our duty outlined by the Quran to defend all churches, synagogues and all places of worship. Any threat to the freedom of religion should be denounced and you can expect members of the Ahmadiyya Muslim Community, as Muslims who believe in the Messiah, Mirza Ghulam Ahmad of Qadian, to be at the front lines defending freedom of conscience and belief. We stand ready to serve and protect our Jewish neighbors against acts of intolerance and hatred.

This is not a progressive idea; rather, it is something that the Prophet Muhammad, peace and blessings be on him, advocated during his lifetime. The battles fought during his lifetime were only defensive and sought to protect the freedom of all people.

The Ahmadiyya Muslim Community has petitioned for peace and justice across the world for over 100 years through the peaceful institution of Khilafat. His Holiness, Mirza Masroor Ahmad, the current Khalifa of Islam and head of the worldwide Ahmadiyya Muslim Community, has stressed the importance of peace and justice by addressing civic servants and religious leaders for over a decade.

He has said that justice must exist on all levels for us to have a practical path to peace.
Immediately following the incident in Philadelphia, members of the Ahmadiyya Muslim Community extended their hands in peace and solidarity with the Jewish Community. Ahmadi Muslims, young and old, were one of the first people to visit the cemetery and helped to clean up and restore the area.

This is the type of community that is required in such a polarized political climate. It is only through acts of solidarity and by standing together can we achieve real peace in our communities. It’s important for us to get to know one another and understand each other’s beliefs. With that in mind, the Ahmadiyya Muslim Community launched the True Islam campaign (trueislam.com) to educate all American Muslims and non-Muslims about the true teachings of Islam.

All our fellow Americans are invited to join us in our effort to end religious wars, condemn bloodshed and reinstitute morality, justice and peace. We are stronger when we are united. I end with the words of Robert F. Kennedy:

“But we can perhaps remember — even if only for a time — that those who live with us are our brothers, that they share with us the same short movement of life, that they seek — as we do — nothing but the chance to live out their lives in purpose and happiness, winning what satisfaction and fulfillment they can. Surely this bond of common faith, this bond of common goal, can begin to teach us something. Surely we can learn, at least, to look at those around us as fellow men and surely we can begin to work a little harder to bind up the wounds among us and to become in our hearts brothers and countrymen once again.”

__________________
Ijaz Ahmed, Ph.D., is on the adjunct faculty at Worcester State University and is a QCC process chemist for Vertex Pharmaceuticals. He lives in Worcester.