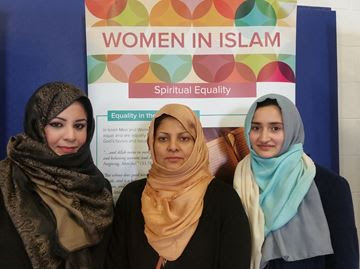 The Ahmadiyya Muslim Women’s Association hosted a peace conference on the role of religion in the 21st century on Sunday.Â

“Come spend a day with me and I’ll show you how a Muslim lives.”

What Naheed Khokhar really wants you to know is “Muslims are normal people like everybody else.”

The national outreach secretary for the womenâ€™s auxiliary of the Ahmadiyya Muslims joked she watches the sexy, sleek, legal drama ‘Suits’.

“Come spend a day with me and I’ll show you how a Muslim lives,” Khokhar said Sunday at a peace conference the Ahmadiyya Muslim’s women’s association, hosted for 300 women of all faiths to promote understanding in light of International Women’s Day, March 6.

Khokhar said the conference brought together women from six faith groups â€” Muslims, Jews, Christians, Hindus, Sikhs and Bahais â€” to talk together about the role of religion in the 21st century and seek greater understanding.

“We have to start the conversation and try to make a difference.â€ she said.

She said in light of issues like Islamophobia and the shooting death of six Muslim worshippers at a mosque in Quebec last month, it’s important to get the message out that what people see on TV is not a true image of Islam.

“What people are seeing on TV is not Islam; terrorism doesn’t have a faith,” she said. Not knowing people of different faiths is, “the same apprehensions you have about the neighbour you don’t know,” she said.