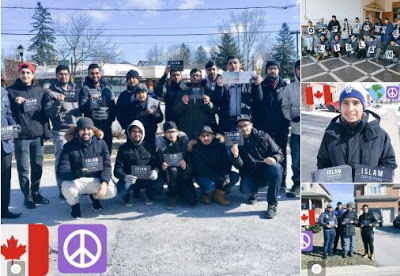 â€œItâ€™s an opportunity for Canadians to ask some questions about their faith, to challenge them, to know what exactly about their Canadian identity is important to them and how they reconcile that with being a Muslim.â€

Muslim youth fanned out across Canada on Sunday, knocking on doors and handing out flyers to try to counter misconceptions about Islam at a time when they say fear of their religion is rising.

The initiative had been planned for weeks but happened to fall one day after rallies across Canada by those opposed to a Liberal MPâ€™s Parliamentary motion to condemn Islamophobia, known as M-103.

Qasid Chaudhry of the Ahmadiyya Muslim Youth Association Canada braved the cold temperatures with his group in Barrie, Ont., Sunday morning as they knocked on doors and offered to answer neighboursâ€™ questions.

He said that although the youth group does ongoing outreach, this particular initiative is especially important after six Muslim immigrants were shot to death on Jan. 29 at a Quebec City mosque.

â€œThereâ€™s a lot of misconceptions people have been getting about Islam,â€ Chaudhry said. â€œWeâ€™re trying to give people the idea that (ISIS) is not Islam. It is a religion of peace.â€

Chaudhry added that he was born in Canada and he wants his neighbours to understand that although he has Islamic values, he also shares their Canadian values.

He added that the response from neighbours in the Barrie area had so far been â€œreally good.â€

â€œItâ€™s amazing because a lot of times people are afraid Islamophobia is becoming a really big problem,â€ Chaudhry said. â€œIt makes us feel that people donâ€™t fear Islam, they fear these extremist groups.â€

Safwan Choudhry, spokesperson for Ahmadiyya Muslim Jamaâ€at Canada, told CTV News Channel that he believes it is important for Canadians to meet ordinary Muslims, rather than just hearing from imams.

â€œItâ€™s an opportunity for Canadians to ask some questions about their faith, to challenge them, to know what exactly about their Canadian identity is important to them and how they reconcile that with being a Muslim,â€ he added.

Choudhry said outreach is important, because Canadians may not be aware that the Ahmadiyya Muslim Youth Association Canada is assisting in the fight against Islamic State radicalization, with their Stop the Crisis campaign.

Choudhry said thereâ€™s â€œno denyingâ€ that anti-Muslim sentiment, as well as anti-Semitism, is on the rise in North America and Ahmadiyya Muslim Jamaâ€™at Canada wants to be on the front line of fighting against it.

The number with â€œunfavourableâ€ feelings toward Muslims was much higher than those with unfavourable views of First Nations (16 per cent), Asians (10 per cent), Jewish people (nine per cent) and black people (eight per cent).

The margin of error for the survey was reported as Â±3.1 percentage points, 19 times out of 20.