Peshawar out to end play-off curse against Karachi 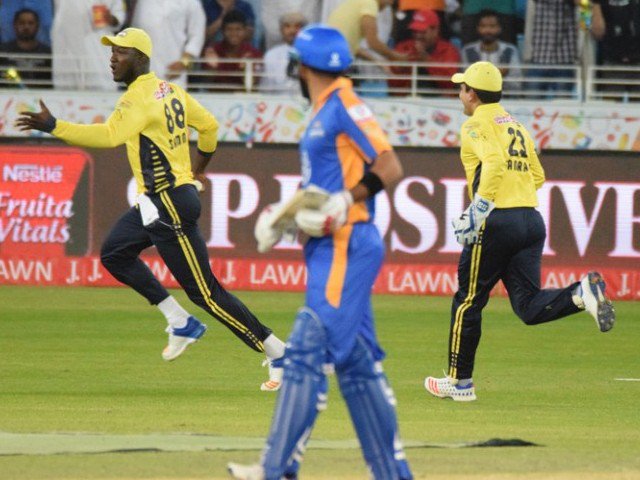 SHARJAH:Â Peshawar Zalmi will be out to end their play-off curse and make it to the final of the Pakistan Super League (PSL) when they take on Karachi Kings in Dubai on Friday.

Peshawar, for the second season running, finished top of the group stages but suffered a one-run defeat against Quetta Gladiators to find themselves facing an eliminator.

However, what is different this time around is that instead of Misbahul Haqâ€™s Islamabad United, they take on Kumar Sangakkaraâ€™s Karachi in the do-or-die game.

Peshawar have a superior 3-1 win-loss ratio against the Karachi side so may go into the game high on confidence. However, their only loss did come in the last game between these two sides.

Batsman Sohaib Maqsood admits the pressure is firmly on the Peshawar side as they once again face the prospect of failing to reach the final after topping their group.

â€œThis is our second chance of reaching the final; there is a bit of pressure but we are trying to be as focused as we can,â€ Maqsood toldÂ The Express Tribune.

The former Pakistan international knows his side should really have been in the final after throwing away the initiative in the game against Quetta where they needed just one run off the final three balls to take the game into a super over.

â€œWe had a really close game against Quetta and we let it go from our hands,â€ he said. â€œBut this time around we are confident we will manage to ensure that the game doesnâ€™t get decided by chance.â€

The right-handed middle-order batsman knows the team that manages to hold its nerves better in the crunch game may well be the one facing Quetta in the final in Lahore. â€œThe team that holds its nerves at the crucial times will have an advantage in the upcoming game,â€ he said. â€œWe were unable to do that in the last game and it cost us the win.â€

â€œBabar can be their main batsman but Gayle needs to be dismissed quickly otherwise he can score big if he stays out there,â€ he said, while also admitting that playing pacer Mohammad Amir and spin duo Imad Wasim and Usama Mir wonâ€™t be easy to face. â€œIt will be a fun match to play under so much pressure.â€

However, the Multan-born added his side also boasts some of the finest match-winners around, naming the likes of skipper Darren Sammy, star all-rounder Shahid Afridi and pace spearhead Wahab Riaz. â€œThey have delivered some match-winning performances and we require something similar in the next game against Karachi.â€

Karachi, on the other hand, are now the tournamentâ€™s form side with five wins in their last six games, including knocking out champions Islamabad in their last game.

However, Imad knows the batsmen need to up the ante against Peshawar. â€œWe were around 25 runs short against Islamabad, but managed to defend it through some brilliant bowling,â€ said Imad.

The Pakistan all-rounder admits the side may have misread the pitch a bit in the last game. â€œWe were expecting the pitch to support the bowlers but it didnâ€™t, although the ball was skiding in the first half and wasnâ€™t coming onto the bat like it did in the previous matches,â€ he said.

Imad impressed in tandem with spin partner Mir and the left-arm spinner hailed his younger leg spin colleague. â€œMir helps me a lot since he is a wicket-taker so my job changes when he bowls with me,â€ he said. â€œHowever, against Islamabad we knew we needed wickets from both ends.â€

Imad admitted the team is riding a wave of confidence with three wins on the trot. â€œThe last two wins against Islamabad and the win against Lahore really lifted the teamâ€™s morale and confidence,â€ he said.