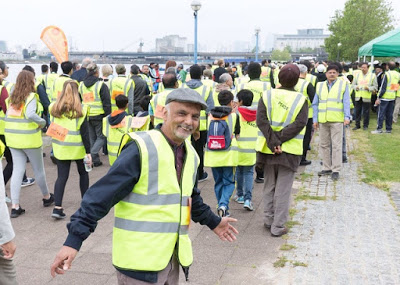 Rafik had a heart of gold and none of us can recall Rafik ever being cruel or mean spirited. He saw goodness in everybody and always tried to see the positive in people.

Yesterday [February 28, 2017], after a long illness one of my oldest and dearest of friends Rafik Safeer passed away.

Many of you will know him through his years of work with Atfal in Khuddam ul Ahmadiyya and virtually every department of the jamaat. More recently Rafik was a popular, much loved and highly respected Sadar of the Surbiton Jamaat, but for me he was quite simply one of my close childhood friends with whom I shared many happy memories across the last 40 odd

Rafik was the son of the late Dr Safeer an educationalist/teacher who had served the jamaat in West Africa and then came over to the UK. Rafik was only a young child when Dr Safeer sadly passed away. This must have been a terrible time for Rafik and his siblings, and the family could have become withdrawn and retreated into themselves, but instead the Safeer family, including young Rafik immersed themselves into the jamaat. Every evening, of every day Rafik and his older brothers Tahir & Nasir Safeer would come to Masjid Fazal to attend both Maghrib and Ishâ€™a prayers. They would take part in jamaat activities at every level whether it was Atfal, Khuddam, Tabligh or any other activity that the jamaat called upon them to perform, and at the heart of all these activities you would always find Rafik.

Rafik was the kindest, decent and upright people that I knew. He was also great company and had a lovely and wicked sense of humour. In those early days of the jamaat during the 70â€™s there were only a few of us and we all became good friends with each other. Rafik was a keen sportsman and played football really well. In addition, he and was an ace at badminton and table tennis. We played all of these sports initially in the old mission house at 61-63 Melrose Road, which would later become Mahmood Hall at Gressenhall Road.

Rafik had a heart of gold and none of us can recall Rafik ever being cruel or mean spirited. He saw goodness in everybody and always tried to see the positive in people. Thatâ€™s not to say that he wouldnâ€™t speak out and express his opinion when he disagreed, but this was usually when he perceived some injustice against someone less fortunate than him. In those early days we were a band of brothers who made the masjid the focal point of our lives. Rafik, for me was the best of us.

In recent years, just like many of us, he faced different challenges in life that placed a great strain upon him, but he always faced adversity with that same calmness and total faith in Allah and never lost his faith, decency or humanity. I feel blessed to have known him, and pray that Allah gives his family and loved ones the strength to bear this truly sad loss. I attach a few photographs of my dear friend Rafik that I hope shine a light on his character, may Allah grant him a lofty status in paradise (Ameen)