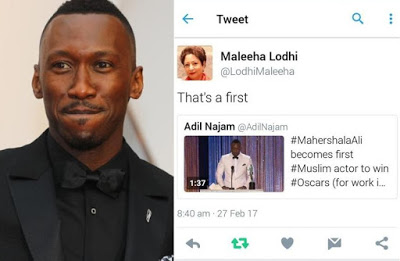 The actor was honoured with Oscar for his portrayal of a drug dealer in coming-of-age drama “Moonlight”, becoming the first Muslim actor ever to win the prestigious award.Â

In what can be called a blatant expose of Pakistanâ€™s communal mindset, itâ€™s diplomat to United Nations, Maleeha Lodhi was allegedly forced to delete a tweet congratulating Oscar winning Muslim actor Mahershala Ali, an Ahmadi, considered to be non-Muslims in Pakistan.

The actor was honoured with Oscar for his portrayal of a drug dealer in coming-of-age drama â€œMoonlightâ€, becoming the first Muslim actor ever to win the prestigious award.

Lodhi, who tweeted to applaud Aliâ€™s success, was criticised for promoting an â€œAhmadiâ€. In an apparent response to criticism, the diplomat went with deleting the Tweet. Â As per PTI, Aliâ€™s birth name is Mahershalalhashbaz and he converted to Islam in 1999. In 2001, he joined the Ahmadiyya Community.

Pakistanâ€™s parliament had declared Ahmadis as non-Muslims in 1974.

There have been instances the community was targeted by Islamic extremists, who view them as heretics. Article 260-3 of Pakistanâ€™s Constitution declares Ahmadis â€œnon-Muslimsâ€. PTI reports that Ahmadiâ€™s are banned Â from preaching and even from travelling to Saudi Arabia for pilgrimage. In a crackdown on Ahmadis, several of their mosques were shut, while publications of their material is prohibited. The minority Ahmadiyya Community members have also been taken to court on blasphemy charges.