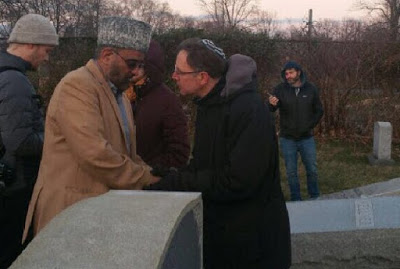 “Members of the local Ahmadiyya Muslim Community have showed up to help us right the headstones. They are calling their youth to come join us.

Between 75 and 100 tombstones were overturned and damaged Saturday night at a Jewish cemetery in Philadelphia, police said Sunday.

While social media users responded with outrage, a group from Ahmadiyya Muslim Youth Association physically showed up to assist in in cemetary.

A local rabbi, Yosef Goldman went on Facebook to say community support was immediate, writing: “Members of the local Ahmadiyya Muslim Community have showed up to help us right the headstones. They are calling their youth to come join us. #sacredresistance”

Pennsylvania Gov. Tom Wolf tweeted: “The vandalism of Jewish headstones at a Phila. cemetery is a cowardly, disturbing act. We must find those responsible and hold accountable.”

Philadelphia Mayor Jim Kenney issued a statement urging solidarity. “Hate is not permissible in Philadelphia,” he said. “I encourage Philadelphians to stand with our Jewish brothers and sisters and to show them that we are the City of Brotherly Love and Sisterly Affection.”

The Anne Frank Center for the United States urged President Trump to take action, tweeting: “Jewish graves in Philadelphia now vandalized. Stop this incubator of #Antisemitism and other hate. WE BEG YOU @POTUS @realDonaldTrump”