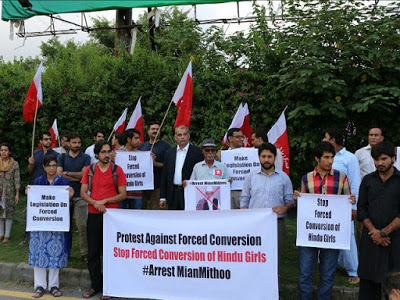 Pakistan is a Muslim-majority country with 80% of the population following Islam. Reports show many Hindu Pakistani girls are forced into Muslim marriages

USA Today reports: â€œLegislation banning such conversions for those under age 18 was passed unanimously late last year by the legislature of the southern province of Sindh â€¦ but it never went into effect.â€

The measure, which called for up to five years in jail for those who forced a conversion, was objected by Islamic groups. â€œThey threatened protests, arguing the law was anti-Islamic and part of a conspiracy to make Pakistan a secular country,â€ USA Today writes.

The report also quotes Hafiz Saeed, a leader of Jamaat-ud-Dawa (a self-described charity that the United States has labeled a terrorist group): â€œWe will not remain silent on this controversial law.â€

This legislative measure was later vetoed in January by Sindh Governer Saeed-uz-Zaman Siddiqui. According to activists, this defeat was a major hindrance for human rights in Pakistan.

The report also recounts two instances where girls were abducted and police refused to help their families. In one narrative, fourteen-year-old Ameri Kashi Kohli was abducted by her landlord and forced to marry him to become his second wife.