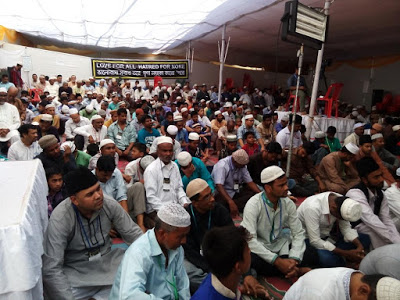 Children of the Ahmadiyya families cannot go to schools for fear of attacks. Many men have stopped going to fields for farming.

Eleven Ahmadiyya Muslim families at Moheshkhola village in the district’s Mirpur upazila have been living in insecurity after some local religious fundamentalists ostracised them.

Around 56 members of the families feared attacks from the fanatics who want them to be declared non-Muslims.

Fundamentalists asked villagers not to mix with the Ahmadiyyas. Local shopkeepers have been asked not to sell products to them, alleged Ahmadiyyas.

Zealots were trying to evict the Ahmadiyyas from their own land.

Sabuj Hossain Khaled, a leader of the Ahmadiyya community, said the fundamentalists declared them ostracised in a religious meeting (Islami Jalsha) on February 20.

He alleged that bigots took four Ahmadiyyas to the meeting and forced them to announce that they did not belong to the community any more.

Children of the Ahmadiyya families cannot go to schools for fear of attacks. Many men have stopped going to fields for farming.

â€œWe are living in a miserable condition,â€ said Mouhyia Khatun, an Ahmadiyya woman.

According to Ahmadiyyas and locals, a few people converted to Ahmadiyya at the village in 1992.

Trouble flared recently when the Ahmadiyyas wanted to build a mosque on their own land. The fundamentalists obstructed the construction work.

The Ahmadiyyas reported the incident to the local police station and sought help.

A police team, led by Officer-in-Charge Rafiqul Islam of Mirpur Police Station, visited the village on February 18 and sat in a tripartite meeting.

â€œWe agreed that both the groups would live peacefully there,â€ added the OC.

â€œWe ordered the local police and others concerned to take necessary actions to make sure that peace prevails there,â€ the UNO said.