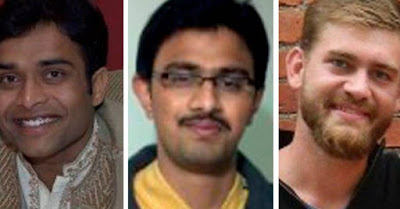 At least one witness reportedly heard the suspect yell â€œget out of my countryâ€ shortly before shooting men he reportedly thought were Middle Eastern. Both men, engineers at Garmin, appear to be originally from India.

Austins Bar and Grill in south Olathe was crowded Wednesday night with patrons, some there to watch KU basketball, others having an after-work drink or celebrating a birthday.

On this night, employees recognized many regulars they know by name or drink. All having a typical Wednesday night at the bar tucked into a strip mall at the corner of 151st Street and Mur-Len.

Until the gunfire rang out at 7:15 Wednesday night, just after half-time of the KU game.

Details are emerging of what happened in and around Austins when a man known to some bar staffers became disgruntled in the patio area, spouting racial slurs at two men of Indian descent and then shooting them and another regular who stood up for the two.

At least one witness reportedly heard the suspect yell â€œget out of my countryâ€ shortly before shooting men he reportedly thought were Middle Eastern. Both men, engineers at Garmin, appear to be originally from India.

Srinivas Kuchibhotla died at an area hospital and Alok Madasani and Ian Grillot are both still hospitalized.

Neighbors and business owners in the area are piecing together the bloodshed inside the bar and its aftermath. The fear. The replaying sound of gunshots. The confusion over why two co-workers would be targeted because they appeared to be immigrants.

â€œI heard a loud noise,â€ said Richard Kim, who at that time of the shooting was closing up his business, Q Cleaners & Alteration, which is next door to Austins. â€œAfter three and four, Iâ€™m sure it is gunfire.â€

He hid until the gunfire stopped and he thought it was clear to go outside. Thatâ€™s when he saw two men on the ground, being helped by other people. One man was inside the patio, the other lying just outside the patio.

Kuchibhotla and Madasani had been at the bar for about 30 minutes or so. The two work nearby at Garmin Ltd. and are regulars at Austins. Maybe once or twice a week, the co-workers could be found on the Austins patio in the early evening. Each would order a Jameson.

â€œWe know them as the Jameson guys,â€ said Garret Bohnen, who has served the two. â€œThey are super nice guys. They would sit, have a cigarette, have a few drinks and pay their tab and leave.â€

Bohnen was hanging out at Austins for a while Wednesday evening and left the bar about 6:45 p.m. When he was walking out, he saw Kuchibhotla and Madasani walking in. Around that same time, Grillot, a sometimes daily regular who either stops for a drink or grabs something to eat, was in the parking lot.

â€œIanâ€™s a really good guy,â€ Bohnen told The Star Thursday. â€œHeâ€™s been going there forever. Weâ€™ve always had a good time with him. Heâ€™s always one to diffuse stuff.â€

And he reportedly tried to do that again Wednesday night in the moments after a patron became disgruntled and before the gunfire rang out.

Adam Purinton, who lives nearby Austins and has frequented the bar in the past, was inside the patio when witnesses say he started spouting racial slurs. Some told The Star that during a rant the man talked about recently being diagnosed with a serious illness.

â€œFrom what I understand when he was throwing racial slurs at the two gentlemen (Kuchibhotla and Madasani), Ian stood up for them,â€ Bohnen said. â€œWeâ€™re all proud of him.â€

At one point, Purinton is thought to have been kicked out of the bar and then came back and started shooting.

The suspect fled on foot as police descended onto his neighborhood just behind Austins. Purinton eventually left the Kansas City area.

About five hours later, he was having a drink at the Applebeeâ€™s at Clinton, Mo., when he told a bartender he needed a place to hide out because he had just killed two Middle Eastern men.

The bartender called police, and he was arrested without incident.