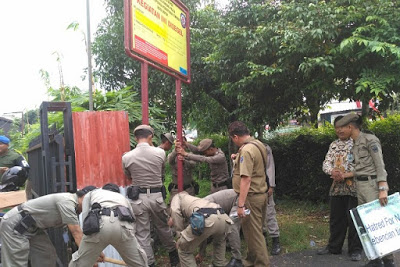 “There have been no reports of disturbance by Ahmadiyah as we sealed the mosque again. [However] if the seal was to be removed there would be strict sanctions.”

The building, a mosque of the Ahmadiyya Community, was sealed by municipal police officers assisted by 60 military personnel to maintain security. 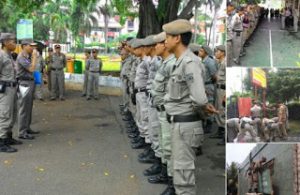 Police officer from Depok City, Dudi Miraz Z, said sealing has previously been carried out in 2015 also. According to Dudi, Ahmadiyya congregational activities have been troubling the local residents and clerics.

“There have been no reports of resistance at Ahmadiyah mosques when we sealed the place again,” he told local media on site.

‘However,’ he added, “if the seal was to be removed, there would be strict sanctions.”.

Policeman were seen removing ‘Love for all Hatred for none’ slogan banners belonging to the Ahmadiyyas and carried those out of the building.,

Meanwhile, the building owner, Farid showed deep regrets about the actions of Pol PP and said closing of the house of worship is unilateral.

“Local governments do not have a strong case to seal a house of worship. “We just do worship here. What is so disturbing about that.”