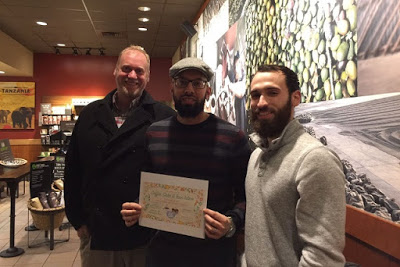 “It’s not our job to convert. We just spread the message of what true Islam is. Loyalty to your country is part of our faith. We love our country. I’m born and raised here, in metro Detroit. I feel like I’m just as American as anybody else.”

Whether they are reaching out to a few individuals each week at a Naperville coffee shop, or gathering with dozens of religious leaders of different faiths in Glen Ellyn to denounce President Trump’s travel ban, local Muslim leaders are trying to dispel fear and misconception through peaceful dialogue.

“I don’t think there’s anything we can do by yelling and screaming, but having these types of forums, giving examples of stuff we do in the community that’s positive, will rid stereotypes,” said Kaashif Qaderi, director of outreach for Ahmadiyya Muslim Community, Chicago Southwest region.

Qaderi invites anyone who wants to discuss current events, ask questions about Islam or just get to know their Muslim neighbors to join him for free food and drink from 7:30 to 8:30 p.m. every Tuesday at the Starbucks at 2936 Show Place Drive in Naperville. The Ahmadiyya Muslim Community launched these weekly informal gatherings, called “Coffee, Cake and True Islam,” at all 74 U.S. chapters of the sect last fall.

“I love basketball. I used to play sports in high school. I went to Michigan State,” said Qaderi, whose position with the mosque is strictly volunteer. “So all these things are really common with any other person that’s an American. And those are things that we’re trying to talk about, the commonalities. I might pray differently than you, and I might have different rituals in how I carry out my faith, but none of it is contrary to American values. None of it is towards violence or hate.”

Qaderi is not disappointed that only a few people show up each week. “The numbers really don’t matter. We look at it as quality over quantity,” he said. “If you can change the heart of one person through your work, then you’ve done something positive for humanity.”

The discussion became more political at a recent interfaith meeting on Feb. 2 that drew more than 80 people to Qaderi’s ornate mosque on a hill overlooking Highway 53 in Glen Ellyn. The topic was the executive order prohibiting people from seven Muslim-majority countries from entering the United States, but the purpose was solidarity, not protest. There were no signs, no shouting, no violence.

Qaderi said a local Christian pastor reached out to his mosque to organize the gathering of Muslims, Christians and Jews, which featured an hour of heartfelt observations, insightful quotations and contemplative prayer.

“It really made us feel we are part of this country; we are loved,” Qaderi said. “Not that we didn’t feel it before, but sometimes you need to be picked up by those around you. It’s easy to be demoralized. Having other people who aren’t in that situation say, I’m here for you, that will make a positive difference.”

Tanvir Ahmad, a member of the mosque who has owned an insurance business in Naperville for 15 years, said lately he is “more reluctant mentioning that I’m a Muslim because fears have been exploited again towards Muslims. I’m afraid of retaliation because of that.”

Ahmad said he did not feel this way after 9/11 “because the statement that (President) Bush gave was so powerful that we are all one together, and you do not single out Muslims.”

Ahmad has attended some of the weekly gatherings at the Naperville Starbucks and says Trump’s executive order created more “polarization” than ever before because “when it comes from the president’s mouth, it gives it authenticity.”

Qaderi suggested community members could support Muslims by getting to know their neighbors, signing petitions and reiterating opposition to violence and extremism.

“It’s not our job to convert,” Qaderi said. “We just spread the message of what true Islam is. Loyalty to your country is part of our faith. We love our country. I’m born and raised here, in metro Detroit. I feel like I’m just as American as anybody else.”

Ahmad said people who come to the weekly meetings admit they are nervous and fearful at first.

“When they see we dress the same way, we have the same issues, it’s just a regular human being they were afraid of — that’s the thing that has been so helpful. I made so many new friends just by talking to them.”